Running on the latest Android 4.4.2 (KitKat) OS, the L969 is powered by a MediaTek MT6582 quad-core chip clocked at 1.3GHz with 1GB RAM, Mali-400 GPU, and 4GB internal storage (expandable up to 32GB with microSD). The MT6582 is a chip from MediaTek that powers many of today's low-end and midrange smartphones, such as the Acer Liquid E700, Gionee Pioneer P4, MyPhone Agua Rio and Ocean Elite, Starmobile Sky, Lenovo S650, S660, S850, and S930. For comparison, we put the benchmark scores of the L969 with those of the Rio and the S660, two MT6582-powered smartphones that we reviewed previously. 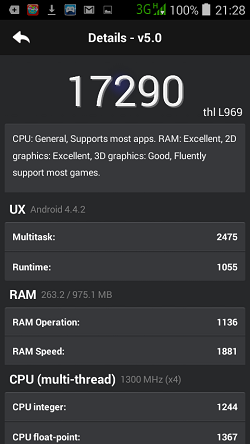 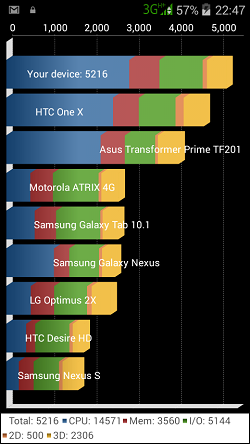 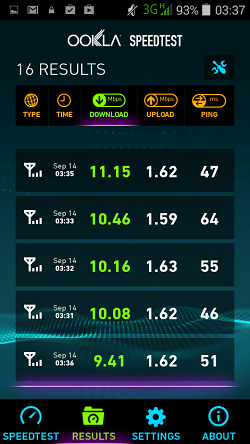 Beginning with AnTuTu Benchmark, the L969 scored 17290. Trailing behind it are the S660 (17405) and the Rio (17206). In spite of the differences, the scores of the three smartphones are close to one another. In Quadrant Standard, the L969 yielded a score of 5216, occupying the third slot. Leading the chart in this category is the S660 (5889), followed by the Rio (5843). In our battery test, the L969 lasted 270 minutes. Its recorded stamina stands between that of the S660 (519 minutes) and the Rio (254 minutes). The S660 comes with a 3000mAh battery, whereas the Rio has a 2000mAh battery. Since the L969 is a 4G LTE-capable device, we also ran Speedtest on it. Connected to Smart Communications' network, the L969 recorded speeds of up to 11Mbps in Fairview, Quezon City. The L969 wasn't actually connected to a 4G LTE network (4G LTE signals might be poor in Fairview), but the recorded speeds are still impressive. 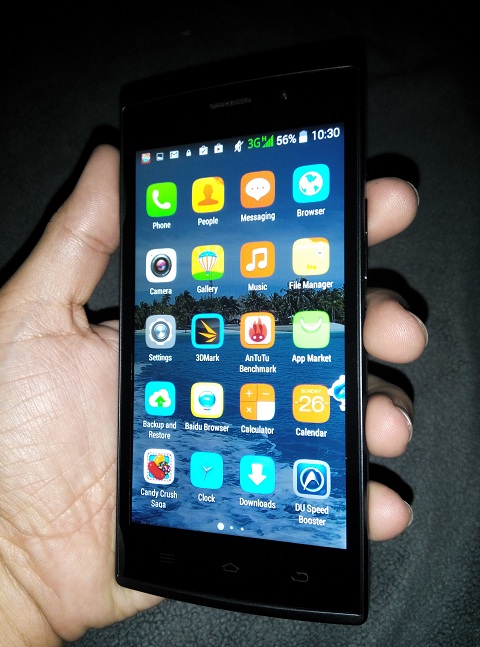 In general, the ThL L969 is a decent device that can handle a variety of daily smartphone tasks. On the outside, it shares similarities with other smartphone models in its category. The same observation goes for its hardware, imaging, and software performance. However, what makes the L969 an outstanding model in its league is its ability to connect to 4G LTE networks (FDD standard). Lenovo's S660 is more expensive than the L969, but it is a non-4G LTE smartphone. With this function, it is similar to Xiaomi’s Redmi 1S 4G which was launched in China for CNY 699 (PhP 4,996). At the moment, the L969 is available in some online stores like GearBest, selling for US$139.99 (PhP 6,000). With these smartphones entering the local arena, we are looking forward to seeing more similar models hitting out store shelves with competitive price points. In line with this development, we are also looking forward to seeing local network operators expanding their 4G LTE coverage in more areas in the country.