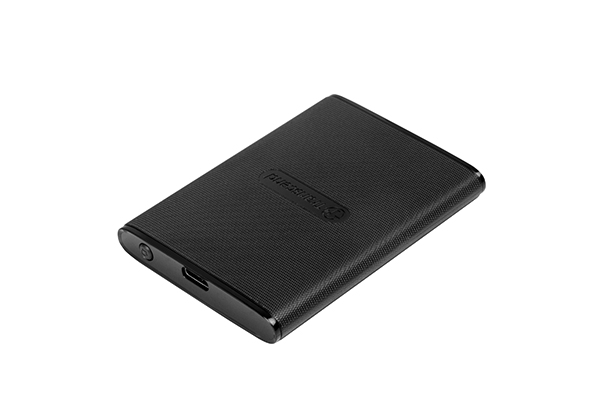 SSDs are slowly becoming cheaper nowadays. You can find them in most high-end products as well as some middle-range laptops or desktops. In portable storage, hard drives are still the go-to devices due to their large capacities. Hard drives, however, are slower and heavier than their SSD counter parts. With the ESD220C, Transcend is trying to penetrate the portable storage market with an essentially entry-level SSD in a compact, USB form.

Before we get into the review of the Transcend ESD220C, here are the complete specifications of the device from Transcend: 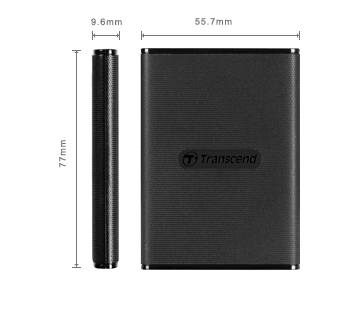 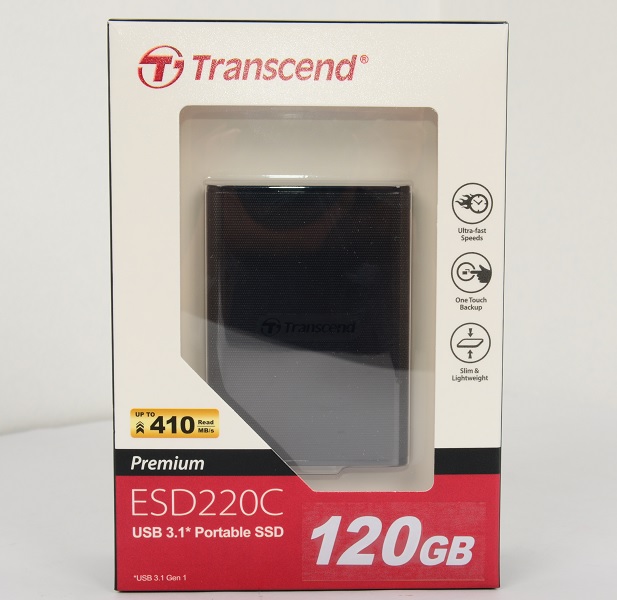 The Transcend ESD220C comes in a fairly inconspicuous box. Outside, there’s a window where you can see the portable SSD. Inside the box are the usual documentation, the device itself, as well as a USB Type-C to Type-A cable. 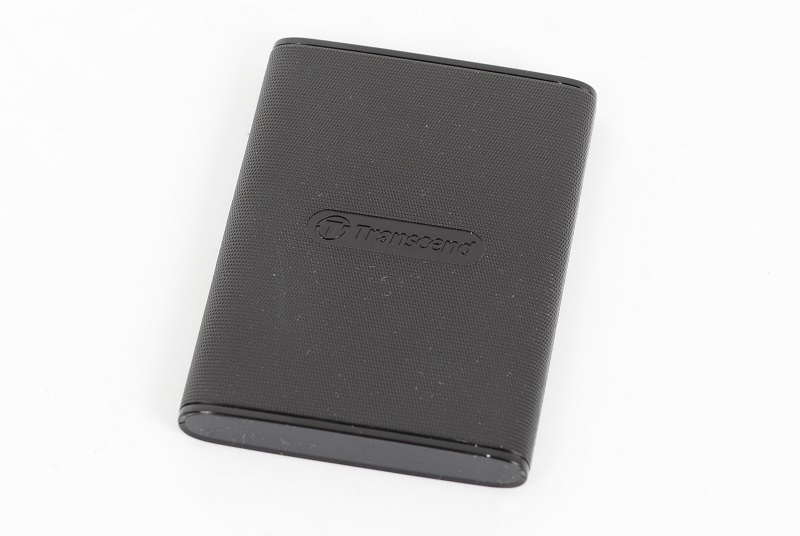 The Transcend ESD220C is surprisingly small only measuring 77 x 55.7 x 9.6mm (LWD). The device is light as well weighing only 52g. It’s really portable even more so compared to other portable hard drives.

As we’ve mentioned, the ESD220C comes with a USB Type-C to Type-A cable, with the Type-C header going into the SSD while the Type-A to your computer. The connection is reversible since it is a Type-C connection. You no longer need to fumble around trying to connect the cable to the device.

Beside the Type-C port is a One-Touch backup button. You’ll only need to press the button to automatically backup any designated folders from your computer to the drive.

Our kit comes with the 120GB version (111GB in reality), but the ESD220C does have 240GB and 480GB variations. To test the SSD, we ran our usual tests, which consist of running AS SSD and Anvil’s Storage Utilities. 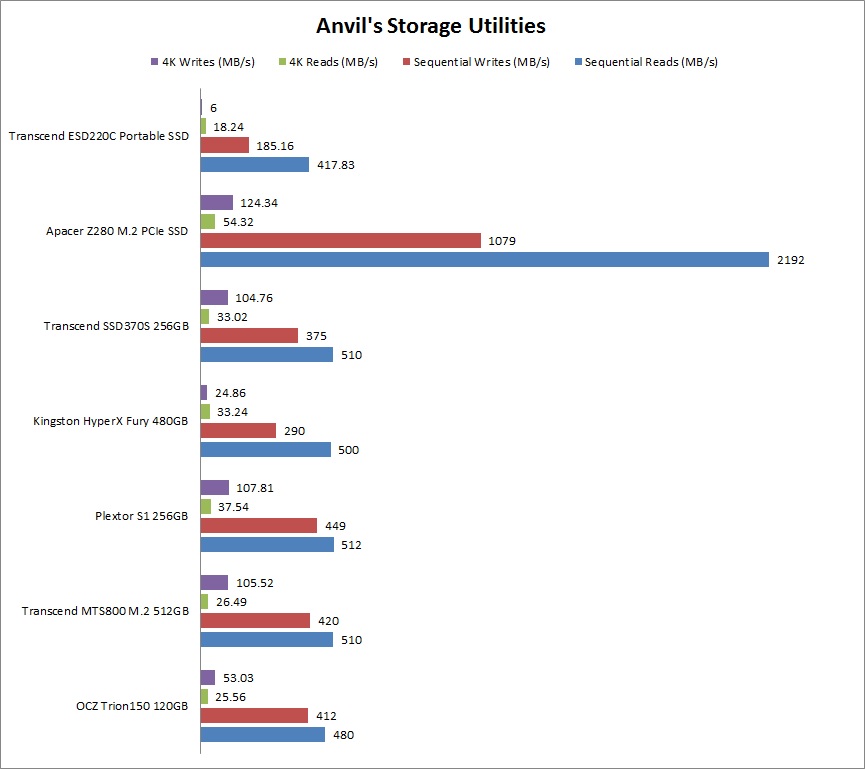 In Anvil’s Storage Utilities, the ESD220C scored impressive Sequential Read speeds of 417.83MB/s, which is almost equal to those of SATA SSDs. Sequential Write speeds, however, is a bit low at only 185.16MB/s. But since this is a lower-end model of the ESD220C series, you may find better performance in the larger capacity models since there are more NAND chips inside them. Random 4KiB Read and Write speeds are fairly low with the device only reaching speeds of 6MB/s in Writes and 18.24MB/s in Reads. 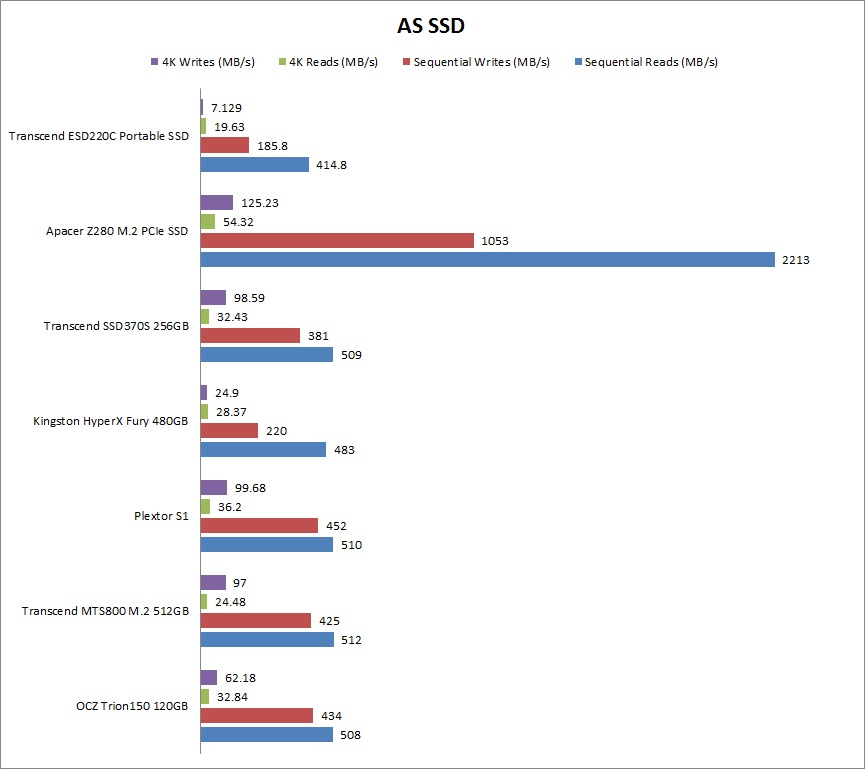 AS SSD also displayed the same results with the device breaking the 400MB/s mark for Sequential Reads while Sequential Writes are the same at 185.8MB/s. 4KiB Reads and Writes are almost the same as well with 19.63MB/s for the former and 7.129MB/s for the latter. 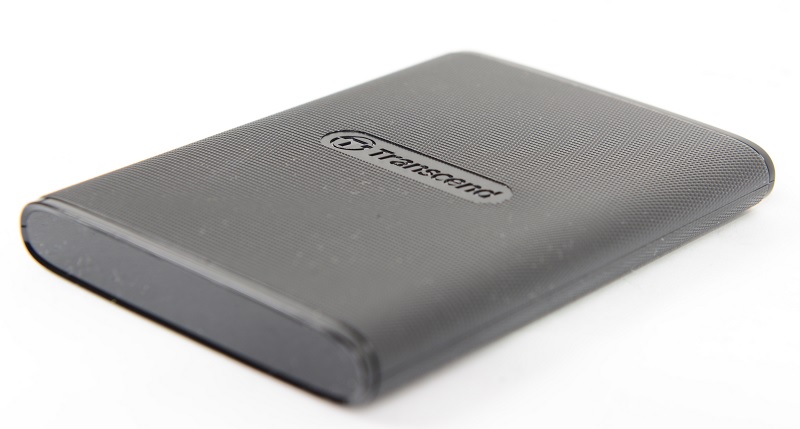 We’ve yet to determine the price of the Transcend ESD220C but based on its performance, the price should be around PhP 3,000 – 4000 for the 120GB model. Despite its fairly mediocre random 4KiB Read and Write performance, the ESD220C still delivers incredibly fast read speeds and decent write speeds (compared to a portable HDD). If speed is an absolute must, you can definitely trust that the ESD220C will perform to your contentment. If you prefer capacity, you might want to hold on to that portable hard drive just a little longer.