ABS-CBN Teams Up with Globe Telecom on Media Convergence Deal

ABS-CBN Teams Up with Globe Telecom on Media Convergence Deal 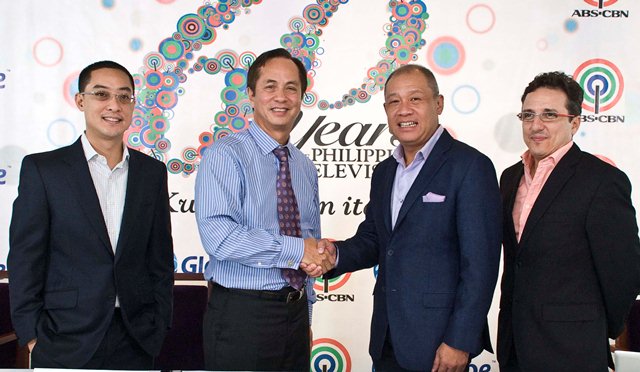 Signaling its foray into the telco business, television network ABS-CBN, through ABS-CBN Convergence Inc., recently announced its intent to launch a new mobile brand that will harness Globe Telecom’s infrastructure. The new mobile brand will have its own set of services including ABS-CBN-branded SIM cards that are powered by Globe. Apart from mobile Internet, SMS, and voice, ABS-CBN’s service will grant users access to the TV network’s new exciting programs through mobile devices like smartphones and tablets. For more information, read the following press release.

Lopez-owned ABS-CBN Convergence ushers in the media convergence era in the Philippines with the expansion of its telecommunications business via a network sharing agreement with Globe Telecom.

In a press conference, ABS-CBN Convergence president and managing director Carlo Katigbak said this newest pioneering move from the 60-year old company aims to create a new experience for Filipinos by expanding their access to ABS-CBN content on mobile devices.

“We have come to realize that the mobile internet is going to become one of the most important platforms for delivering content to our audiences. We believe that in the same way television revolutionized the mass market’s ability to receive information and entertainment, the wireless internet will be the next most important medium for our audience. Very soon, our Kapamilyas will enjoy special shows, receive our news, and interact with our stars from anywhere and anytime they want, through their tablets and cellphones,” Katigbak said.

He said, "We are happy that Globe is once again at the forefront of a pioneering effort. We entered this partnership to provide Filipinos with more reasons to enjoy their mobile phones. The exclusive content that ABS CBN will provide ushers in a new form of entertainment for mobile users in the Philippines. We are now seeing the gains of our network modernization and IT transformation initiatives, having new capabilities to enter into these businesses to showcase our strength and leadership.”

Through the network-sharing agreement, Globe will provide capacity and coverage on its existing cellular mobile telephony network to ABS-CBN Convergence on a nationwide basis. The parties may also share assets such as servers, towers, and switches.

This is not the first time that ABS-CBN has ventured into new media territory in order to deliver its programs and other content to its viewers. In the 2000s, ABS-CBN launched TFC.tv, the first video-streaming site that carries ABS-CBN content intended for Filipinos abroad. Recently, ABS-CBN also introduced its free video streaming website for Philippine residents, iWanTV!, which has revolutionized the viewing habits of Filipinos by allowing them to watch ABS-CBN programs on demand.

Katigbak maintained that the best is still yet to come for Filipinos, who remain to be the network’s inspiration in coming up with world-class programs and innovative ways of delivering content.

“ABS-CBN has always been about delivering Filipino content to our audiences over the platforms that are most relevant to them,” he explained. “This is also another milestone in our transition from being predominantly a broadcast company to becoming a complete media enterprise, reaching our audiences not just on television, but on anymedium that is important and relevant to them.”

ABS-CBN, exuding the pioneering spirit that has become a trademark of Lopez-owned companies, was also in the forefront of the cable TV industry through SkyCable and is well ahead in preparing for the Philippines’ switch to Digital Terrestrial Television with test broadcast activities being conducted in different parts of the nation.

It has also set a template for media organization expansion, as it has successfully spread out its business from just radio and TV broadcasting to also print, licensing, music, events, and now, telecommunications.