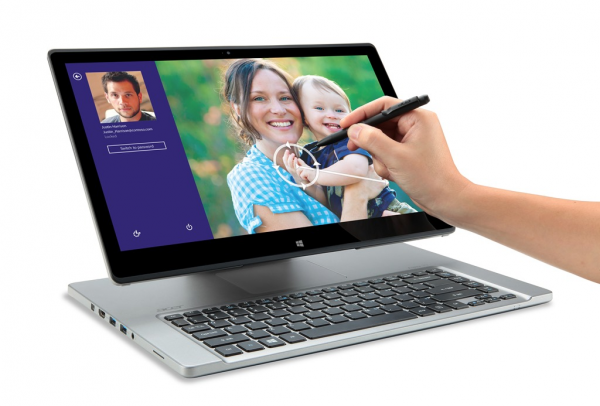 IFA 2013 will be starting really soon, and Acer has already started the ball rolling by revealing an update to the Acer Aspire R7. The R7 is a 15.6-inch (multi-touch, full HD, 1920 x 1080p) convertible Ultrabook comes with an Ezel hinge which allows users to tilt the machine's in many different angles by just using one hand.

The updated version will feature a fourth generation (Haswell) Intel Core CULV processor, up to 12GB of RAM, a 1TB HDD (or a 256GB SSD) and a full-sized backlit keyboard. Acer also promised that the R7 will arrive with the latest Windows 8.1 operating system.

An interesting addition to the R7 is the bundled Acer active pen. According to Acer, the Acer active pen uses N-trig DuoSense technology (electromagnetic induction) which gives users several levels of pressure sensitivity for a more realistic drawing or writing experience.

The new Aspire R7 with digitizer, will also come with a few pre-loaded apps that users can take advantage of to enhance their experience of using the machine:

The R7 will be available in Europe, Middle East and Africa in the fourth quarter of 2013, and will start at the suggested price of €999.