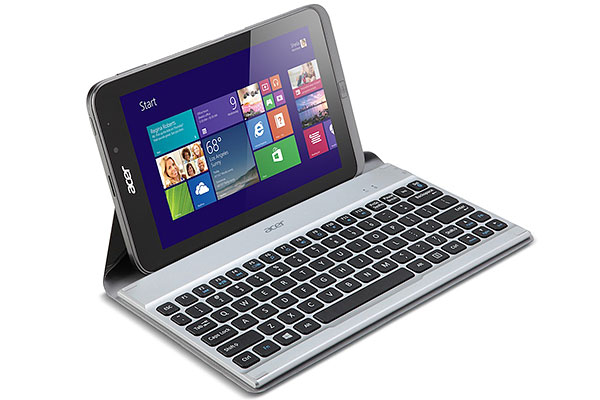 The Acer Iconia W3 was the world’s first 8.1-inch Windows 8 tablet. Following the general availability of Windows 8.1, Acer has now unveiled the Iconia W4, which obviously will run the updated OS.

Also improved in this second outing is the screen. The Iconia W4 is now equipped with an IPS screen with a 1280 x 800-pixel resolution. Internally, it’s powered by a quad-core Intel Atom processor (Bay Trail) running at 1.8GHz, has 2GB of RAM, and either 32GB or 64GB of onboard storage. Other amenities include a micro-USB port, a micro-HDMI port, a microSD card slot, a SIM card slot, and a pair of cameras (5MP rear; 2MP front). Battery life is said to last up to eight hours. Microsoft’s Office Home and Student 2013 Edition is also preloaded on the tablet. Among the many new accessories announced, the two most eye-catching ones are the Crunch Cover and Crunch Keyboard. The former props the tablet up at different angles; the latter has a 0.21-inch-thick Bluetooth 3.0 keyboard.

The Acer Iconia W4 will be available this month in the U.S. and Taiwan, and is priced at US $329.99 (32GB) and US$ 379.99 (64GB). No local availability details are available at the moment. We’ll keep you updated once we hear from Acer Philippines.