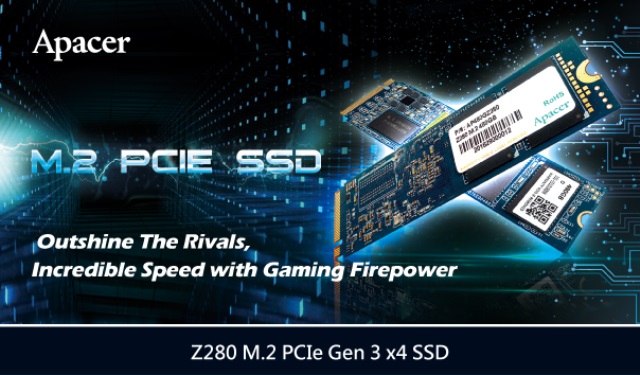 To give incredible speed and uncompromised gaming performance, Apacer introduced its latest SSD, the Z280, which supports PCIe Gen 3 x4 and is compliant with NVMe 1.2 in a M.2 form factor.

Apacer created a transmission at 2500 per MB and 1350MB per second. Aside from offering a memory capacity of 480GB, Z280 also has a random write of 175,000 IOPs to ensure smooth gaming actions.

With only 80mm in length, the Apacer Z280 adopts the ultra slim size of M.2-2280. It also fits most of the laptops and mini-PCs to easily turn any device into highly portable gaming tools.

The Apacer Z280 is an efficient power-saver, which is capable of performing at low-power consumption. It is equipped with several advanced features to ensure that the PCIe Gen 3 x4 interface is at optimum, including ECC with 120bit per 2KB BCH, End-to-End Data Protection, Smart ECC, Global Wear Leveling for fortified SSD life, SmartRefresh for maintaining accuracy and safety of data access, and S.M.A.R.T. monitoring system.

In addition, Apacer also announced a specially designed SSDWidget software that allows users to examine the status of SSDs.