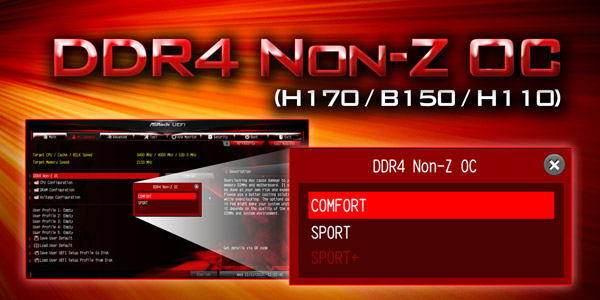 DDR4 memory overclocking may have been the prerogative of owners of Intel Z170 motherboards, but no more, at least not if ASRock has its way. The company just announced a new feature on its B150, H170, and H110 motherboards that will allow users to overclock their DDR4 memory modules on those boards.

Dubbed DDR4 Non-Z OC, the feature adds automatic memory overclocking capabilities to ASRock B150, H170, and H110 motherboards for improved memory performance. It is actually similar to the DDR4 OC feature found in the UEFI BIOS of ASRock Z170 motherboards, which is able to increase the frequency of select DDR4 DIMMs from 2,133MHz to 2,800MHz, a 30% speed boost.

ASRock has also made it easy to check if your memory modules are compatible with DDR4 OC (both Z and non-Z versions) with a custom boot image that will show up when everything is working as intended. With non-compatible modules, the ASRock boot logo will be plain white, but if your memory works with the overclocking feature, the logo will take on a dash of gold through its middle.

Users can reportedly expect up to a 5% performance boost in the SiSoftware Sandra memory benchmark, going by tests conducted by ASRock on one of its Intel B150 motherboards.

Here are the non-Z170 motherboards that currently support DDR4 Non-Z OC, with more on the way according to ASRock:

This isn't the first time that ASRock has brought features from Intel's performance Z-series chipset to the more mainstream boards. Back in 2013, it also announced a Non-Z OC feature that allowed users of Intel H87 and B85 boards to overclock their unlocked fourth-generation Intel Core processors.

Previous Story
Samsung discusses the design philosophy behind the Galaxy View
Next Story
The best of 2015: Digits Trading unveils the coolest and most popular tech accessories of 2015