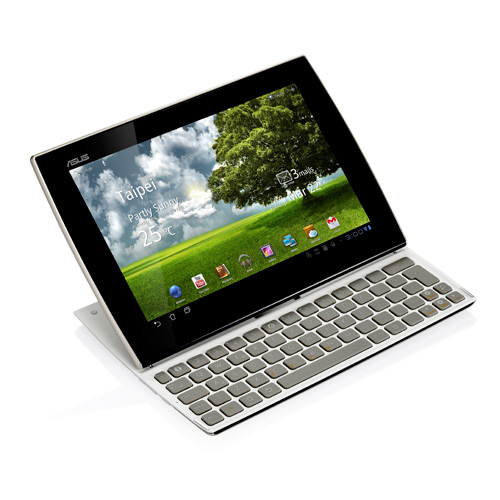 MANILA, PHILIPPINES - ASUS launched the ASUS Eee Pad Slider, a tablet that builds on the great success of the Eee Pad Transformer. Prior to its launch, the Eee Pad Slider has already made its mark with its winning design at the International Design Excellence Awards 2011. The Eee Pad Slider, which comes in either pearl white or metallic brown, features a slide-out keyboard, the new Google Android 3.1 operating system (Android 3.2 upgradable), as well as a plethora of powerful multimedia features. In pad mode, users can experience rich visuals on the 178° wide viewing angle IPS display. Connectivity is a breeze too, with the built-in USB port, Micro SD card reader, and mini-HDMI port. In slide-out mode, users can take advantage of the keyboard to compose emails and blog posts faster than ever.

Powered by the NVIDIA Tegra 2 dual core processor, the ASUS Eee Pad Slider is blazing fast whether browsing the Web, watching HD movies, listening to music, or doing all of the above at once. HD video playback and surround sound system are supported, so users can easily view media from their Eee Pad Slider on their home entertainment system.

The brilliant IPS display panel, with an ultra-wide 178° viewing angle and 16:10 golden ratio, not only provides an unrivaled experience, but is also protected by a layer of scratch-resistant Corning Gorilla Glass. With 10 finger multi-touch support, users can have the most natural and intuitive touch experience possible. On top of that, the front-facing 1.2-megapixel camera and back-facing 5-megapixel camera gives users video conferencing capabilities as well as the ability to take stunning pictures.

The slide-out keyboard that is built right into the ASUS Eee Pad Slider gives users a faster and more comfortable typing experience compared to an on-screen keyboard. Now users can be productive anytime and anywhere. The pre-installed Polaris Office 3.0 gives users a professional Mobile Office Solution, allowing them to view and edit office documents including documents, spreadsheets and presentation files.

To help users seamlessly transfer data between devices, ASUS WebStorage provides one year of unlimited cloud storage so users can backup and share all of their favorite songs, movies, and photos. With the addition of the 16/32GB eMMC slot, USB port, Micro SD card reader, and mini-HDMI port, the Eee Pad Slider is truly a productivity and entertainment powerhouse.

ASUS also included several unique applications such as MyNet, MyCloud, and MyLibrary. MyNet easily streams digital media wirelessly to home network devices, so HD videos or music can be played on HDTVs or desktop PCs. MyLibrary consolidates downloaded books, magazines, and newspapers in one easy-to-browse profile, while MyCloud is a total cloud solution that provides access to digital content such as music, videos and photos. Users can even use MyCloud to remotely access and control their PC or Mac systems and access applications to extend the capabilities of the Eee Pad Slider.

Finally, the Google Android Market offers hundreds of thousands of apps for users’ enjoyment, including popular ones such as Angry Birds, Facebook, and Twitter.

Check out or full review of the ASUS Eee Pad Slider here. ASUS has established a close relationship with master designer David Lewis, whose studio has been responsible for accounts such as Bang & Olufsen for several decades. Previous collaboration included work on the NX90 notebook, and ASUS and Lewis got together again to develop the new N Series. Its streamlined and modern concept combines simplicity and elegance for a unique look. Some of the main points include polished metal frames around edges, glossy piano-like surfaces, and a sound wave-inspired speaker mesh. The keyboard offers seamless integration with the rest of the notebook as well as reinforced fast action keys for improved typing, while palm rests give consumers the benefit of a soft-touch feel.

New N Series notebooks include the Music Now feature, a software suite that loads music files in seconds. They are packed with thoughtful ASUS features and the latest technology. Exclusive Instant On functionality helps users resume the notebook in a mere two seconds while better managing the battery so standby mode can be prolonged to 15 days. The charging of USB-based devices occurs more efficiently with USB Charger+, a powered port that can top up batteries even when the notebook is turned off. With consumers using more portable devices via USB, this feature is especially useful and time saving. For improved multimedia and smoother performance, new N Series notebooks include 2nd generation Intel Core processors and powerful DirectX11-compatible NVIDIA GeForce GT 555M graphics, which enable high-spec gaming. NVIDIA Optimus technology switches between integrated and discrete graphics to ensure optimized performance and a longer battery life, while USB 3.0 offers up to ten times the data transfer speeds of USB 2.0.