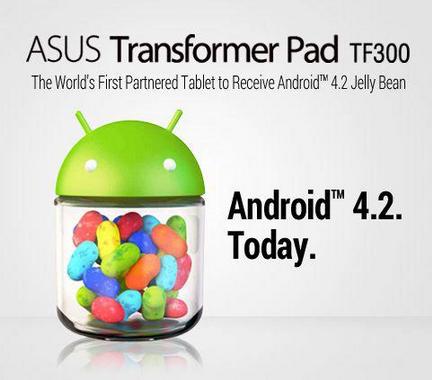 The ASUS Transformer Pad TF300 tablet has been around for awhile, but it still one of the best in its class. ASUS Philippines officially launched the tablet in July last year for the price of PhP 24,995. Powered by an NVIDIA Tegra 3 quad-core processor with 1GB DDR3 and 32GB ROM for storage, the TF300 initially arrived with Android 4.0 (Ice Cream Sandwich) running on it. In front, the TF300 features a 10.1-inch WXGA (1280 x 800) LED screen with 10-point multitouch. Eventually, ASUS issued a statement announcing the release of the Android 4.1 (Jelly Bean) for the TF300 as well as for the Transformer Pad Prime and the Transformer Pad Infinity TF700. Yesterday, roughly eight months after the release of the Android 4.1 update, ASUS Philippines announced the rollout of the 4.2 update through its Facebook fan page. Noticeably, ASUS’ post points out that the TF300 is “world’s first partnered tablet to receive” the said tablet.