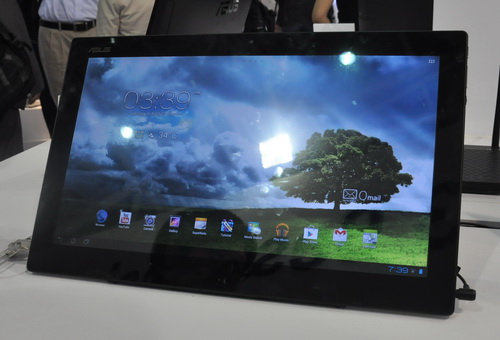 Naming conventions among device manufacturers can be tricky, in which the addition or the omission of a small dash or a single letter can change the entire definition of a product. In the case of ASUS, one example is the P1801-T which can be mistaken for the Transformer AIO P1801, but in reality is a truly different animal. The most obvious difference is the absence of a docking station, which when united with the tablet component of the P1801, the entire system becomes a true Windows 8 AIO PC. The P1801-T is different. By looking at the photo above, we can see that it works alone and does not have a docking station. The P1801-T looks like an 18.4-inch Full HD (1920 x 1080) tablet that has a folding stand at the back. Categorized as a portable AIO PC, the device is also equipped with a handle. Proclaimed as the world’s first Android-based AIO PC according to ASUS, the P1801-T is powered by NVIDIA Tegra 3 with 2GB DDR3 (1600MHz) and 32GB EMMC, and runs Android 4.1 (Jelly Bean). In terms of battery life, the Android-based AIO PC can last up to five hours. Using the Transformer AIO P1801's price of PhP 59,995 as a reference, the P1801-T should be a lot more affordable.