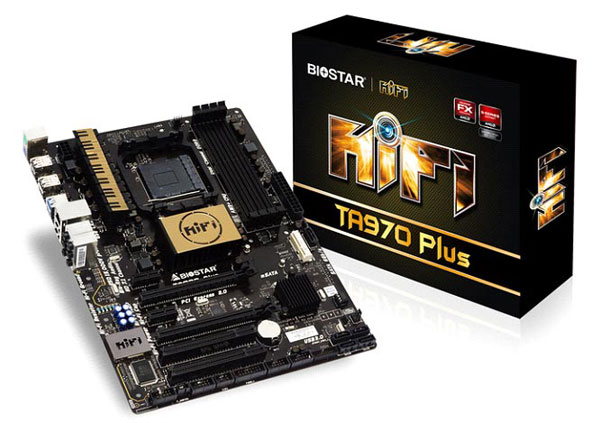 Biostar has announced the TA970 Plus AMD AM3+ motherboard, targeted primarily at gamers and enthusiasts unwilling to put too much strain on their wallets.

The AMD 970 chipset board comes with features such as ACC (Advanced Clock Calibration) and AMD Overdrive, which enable easier overclocking to help gamers squeeze the most out of their AMD CPUs. ACC helps power users achieve a more stable overclock by allowing them to calibrate the clock timings between their processor and RAM. The 140W processor TDP also means more overclocking headroom for 95W and 125W TDP CPUs.

The full-sized ATX board sports four DDR3 DIMM slots that support up to 64GB of DDR3-2133 (OC) memory in total and an mSATA/mini PCIe combo port. There’s also support for two-way AMD CrossFire, which will run in x16 and x4 mode on the dual PCIe x16 2.0 slots. In the way of further connectivity and I/O options, the Biostar board features an additional two PCIe x1 2.0 slots, two PCI slots, and five SATA 6Gbps connectors with support for RAID 0/1/5/10.

Biostar has also chosen to focus on audio with the TA970 Plus and the board supports Biostar’s Puro Hi-Fi and Bio-Remote II technology. According to the company, Puro Hi-Fi technology features an integrated independent audio power design with a built-in amplifier and utilizes audio components capable of independent power delivery for a significant reduction in electronic noise for better sound quality. It supports a sampling rate up to 192kHz/ 24-bit and so is capable of high-resolution audio playback. We've more details of Puro Hi-Fi technology covered in this news piece.

And with Bio-Remote II, users can connect their Android or iOS smartphone to their PC via Wi-Fi and use it as a remote control for their PC sound system. The TA970 Plus has an MRSP of US$79. For more details, please visit Biostar’s website.