BlackBerry outs Passport in the Philippines

BlackBerry outs Passport in the Philippines 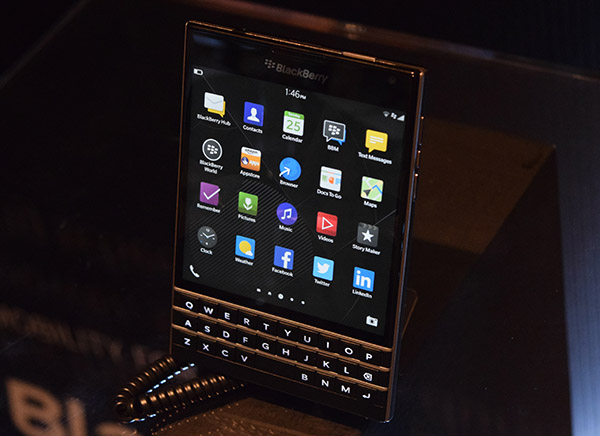 Making noise is BlackBerry as it locally launched its new handset in the form of the BlackBerry Passport. Redefining the level of productivity you can achieve with a smartphone, the Passport features a 4.5-inch square touch screen with a 1:1 aspect ratio and 1440 x 1440 pixel resolution, and a QWERTY keyboard with a responsive touch surface that lets you perform touch functions. Inspired by passports, BlackBerry’s new handset is portable enough and easily tucks into one of your pockets. It doesn’t compromise build quality as it utilizes premium materials such as Corning Gorilla Glass 3 for the display and a stainless steel frame for added strength. It’s not just the outside that’s good since this device is powered by a beefy 2.2GHz quad-core Qualcomm Snapdragon 801 that’s paired with 3GB of RAM. It has 32GB internal storage that can be expanded via a hot-swappable microSD slot (up to 128GB of additional storage), and runs on the latest BlackBerry 10.3 OS. BlackBerry didn’t skimp out on imaging as it equips the Passport with a 13MP auto-focus rear camera with Optical Image Stabilization (OIS) and a 2MP fixed-focus front camera. The Passport is also LTE ready so you can get those 4G data rates, perfect for productivity while on-the-go. Lastly, keeping the Passport fueled is a 3450mAh battery, which should let it last a whole day with moderate to heavy usage.

BlackBerry doesn’t only provide consumers with wonderful hardware as it also beefs up the software side of things with its BlackBerry Blend, BlackBerry World, and access to Android apps via the Amazon Appstore.

The BlackBerry Passport is already available through authorized resellers with an SRP of PhP 35,790.