The Japanese electronics giant has come a long way ever since launching the world’s first organic light-emitting diode (OLED) television in 2007 in the form of the Sony XEL-1. Their latest lineup which can be considered as one of the highlights of the Consumer Electronics Show (CES) 2017 combines premium physique and performance.

“Sony is always at the forefront of innovation and we lead the future of television by bringing the new range of 4K HDR TVs, especially the Sony BRAVIA OLED TV. We want to elevate TV viewing experience ad bring reality right in the comfort of your own home, with enhanced brightness and contrast features. The colors are more vivid and the sounds are clearer than ever before. Your TV experience with Sony will be unbelievable and it will change the way you view TV,” said Nobuyoshi Otake, Sony Philippines President and Managing Director. Available in 55-inch and 65-inch models, the Sony BRAVIA OLED A1E series has a Triluminos Display which conceals a 4K HDR X1 Extreme processor making the televisions capable of producing images in life-like picture quality while delivering an outstanding balance of brightness and contrast. These televisions also support Dolby Vision HDR, and 8 million self-illuminating pixels doing the job of giving a blur-less image and a wide-viewing angle. 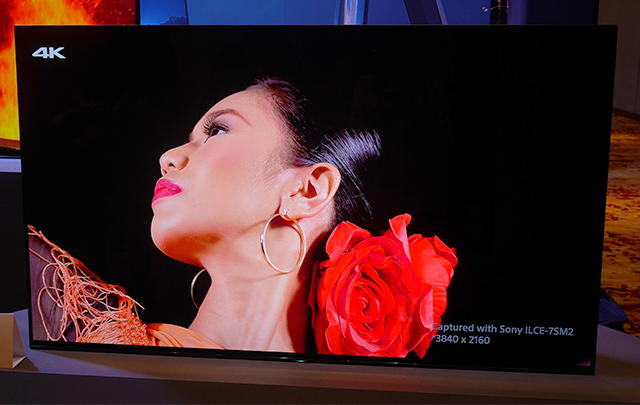 If you’ve seen one of the variants of the A1E series, you’ll notice the absence of visible speakers. That’s because Sony has equipped these televisions with the Acoustic Surface Technology which makes the Sony BRAVIA OLED A1 series’ screen perform as a speaker as well, which in turn produces outstanding audio through image and sound synchronization.

Coming in as Android televisions, the series has built-in Chromecast to let users view images and videos from different screens and to watch a roster of TV shows and movies from streaming websites. The televisions come in with voice search, Google App Store, web browser and content bar. The series also supports HDR gaming for PlayStation Pro. Sleek on the outside, the Sony BRAVIA OLED A1E series easily complements any space may it be at home or in the office with its One Slate concept and minimalist design. The televisions can either be wall-mounted or placed on flat surfaces with its slanted stand.