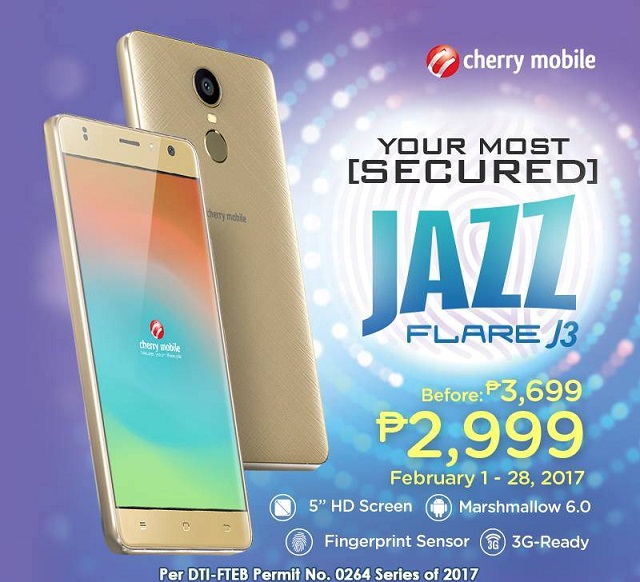 Cherry Mobile has been known for its affordable smartphones, but this February, the Philippine-based mobile phone maker is making one of its smartphone models more affordable. From PhP 3,699, the Cherry Mobile Flare J3 is now selling at PhP 2,999. Described by Cherry Mobile as one of its most secured handsets because of its fingerprint sensor, the Flare J3 comes with a 5-inch IPS LCD screen with HD resolution (720 x 1280p). It runs on Android 6.0 Marshmallow OS backed by a MediaTek MT6580 chipset (quad-core), 1GB RAM, and 8GB internal storage (expandable up to 64GB), specs that put it in the same league as the Alcatel Pixi 4 Plus Power. On the imaging front, the Flare J3 comes with an 8-megapixel rear camera with LED flash and 5-megapixel front-facing camera. In terms of connectivity, it supports 3G HSPA+, Wi-Fi, Bluetooth 4.0, and has a 3.5mm audio jack and a micro-USB 2.0 port. Its battery has a rating of 1900mAh. So, if you are looking for a less expensive smartphone with a decent set of features and specifications, try to check out the Flare J3 in select SM Cyberzone locations like in SM BF Parañaque and SM Mega Center Cabanatuan.