A modern Smart TV used to be one of the few ways to gain access to the internet on the big screen and its array of entertainment option. However, you’re still limited by the platform’s development and apps created for it. Somehow, the smartphone still seemed to be the superior option because of the native iOS or Android platform that gave you access to an unprecedented variety of content and apps. Plus, you could directly interact with the phone on its touchscreen.

The Touchjet Wave will be the game changer to bring parity to your TV. Mount it on any TV up to 80 inches in size and watch it transform your TV user experience as it becomes a giant touchscreen – with an Android OS to boot! 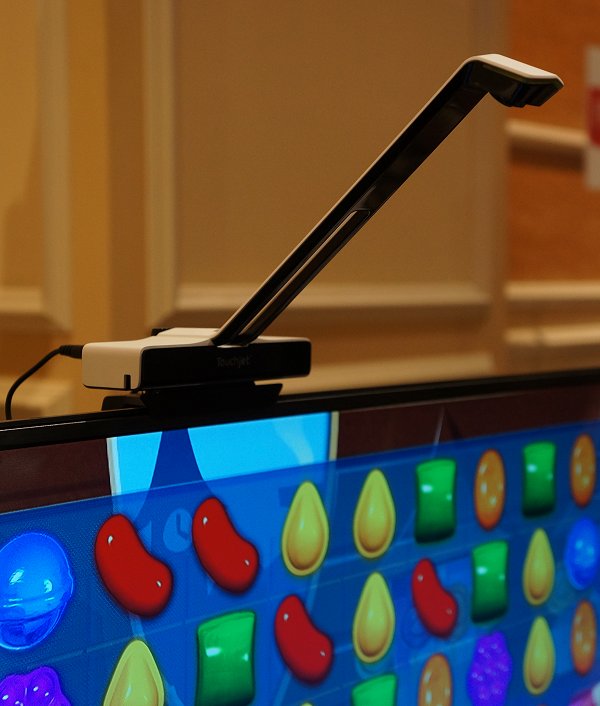 So how does it all work? The Wave’s boom or extensible arm has optical sensors to track finger movements (manages four touch points) while its control unit has a 2GHz quad-core ARM Cortex-A9 processor, 2GB RAM, 16GB of flash storage, Wireless 802.11b/g/n with an Android 4.4 Kitkat OS running with a Touchjet skin. So you can install just about any Android app or game and control it on screen – like Candy Crush for example. All you need to do is find a power point for the Touchjet Wave and a spare HDMI input on your TV.

If you don’t feel like standing in front of your TV to interact with it, the Tocuhjet Wave has got you covered with more bundled accessories so that you never need to leave the couch. Included in the bundle is an infrared stylus to control any app from the comfort of your seat. You also get a keyboard for text input needs. An Air-mouse is also available, but that’s an optional add-on. You can even install a Touchjet app on for your smartphone to use it as a control device for the Touchjet Wave. Important to note is that this differs from screen mirroring functions that duplicates your phone’s screen on to the TV.

But that’s not all. The base of the Touchjet Wave that mounts on your TV also incorporates a camera and dual microphones to enable video conferencing and Skype call from your couch. The unit even has basic voice control capability to invoke some basic functions like Skype calling for example.

All this extra functionality and capability to your TV can be yours for just US$199 and you can expect this to be in available in standard retail and online stores from April this year.

A lot of what the Touchjet Wave does isn’t revolutionary and certain aspects are available through Android TV boxes, Smart TVs and others. However they are either too expensive (like buying a new TV) or don’t really address all aspects or are just clunky (A.C. Ryan’s Android media player comes to mind). As such, none have put together a capable and convincing package such as this and we think the Touchjet Wave has the potential to change the way of what you expect from a modern TV.

So get ready to transform your living room and bedrooms!

Previous Story
Oculus Rift now available for pre-order, priced at $599
Next Story
The Simpiz iTron aims to be the fastest charging power bank in the world