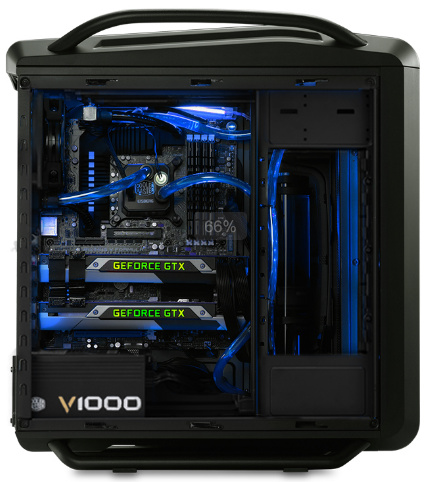 Inspired by Cosmos and Cosmos II, the Cosmos SE features the trademark curved aluminum handles and sleek outer exterior. It has the ability to support up to eight fans with four being pre-installed: two 120mm blue LED fans in the front with LED on/off control, a 140mm fan in the top, and a 120mm fan in the rear. Liquid cooling support is built in for 120, 240, 280, and 360mm radiators with users being able to install a 120, 280, and a 360mm radiator all at once.

Capable of accommodating up to eight HDDs or 18 SSDs via removable HDD/SSD cages, the new chassis can house multiple high-end graphics cards up to 395mm in length, and even tall CPU coolers up to 175mm in height. With multiple detachable dust filters in the top, front, bottom, and side panel, there are many cable pass-through areas and a large rear cable management space of 34mm to ensure easy routing of cables without compromising on optimal system airflow.

The Cosmos SE will be offered in two models, one with a windowed side panel, and the other with a solid side panel.