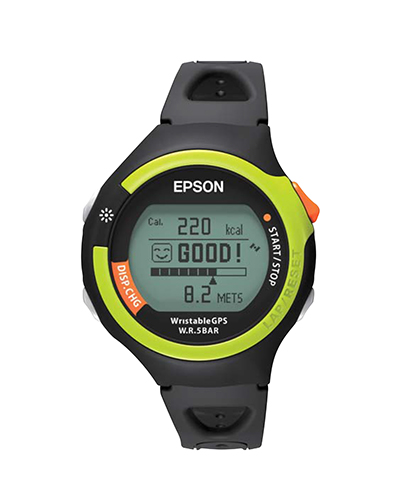 If you're a health buff and enjoy running as a means of staying fit, then you'd be happy to hear that Epson has made its running monitors more suitable for the athletes' needs. With these monitor watches, runners can accurately measure and record their speed and the distances they have run. It combines high GPS accuracy with a light, compact design and long battery life.

Called in Japan as the "wristable GPS", these water-resistant products are now more energy-efficient than before. The company's engineers reduced the energy consumption to a level that would allow the battery to operate for 14 hours or more while the GPS function was in operation. They also created an algorithm to improve the accuracy of the distance data in which they managed to greatly reduce the discrepancies by upon the deployment of the algorithm. Finally, the device is now more light and compact thanks to the newly-shaped antenna that also has a wider reception angle.

Attached is the full press release:

Launched this year in Japan as the "WristableGPS*", Epson's newly developed GPS running monitor is an accumulation of the company's technologies and expertise. By simply strapping it to their wrists, runners can accurately measure and record their speed and the distances they have run. This new product combines high GPS accuracy with a light, compact design and long-battery life.

With the number of leisure runners increasing worldwide, many companies have introduced GPS-based wristwatch-type devices that allow athletes to record their distances, routes, and speed. However, products that are light and compact often sacrifice GPS positioning accuracy, and products with accurate GPS often have poor battery life. It has to date been difficult for manufacturers to come up with a product that combines all the key factors of GPS positioning accuracy, compact design, and long battery life.

Epson engineers began work on designing the new GPS running monitor with the aim of solving all these issues. The first challenge was to reduce energy consumption to a level that would allow the battery to operate for 14 hours or more while the GPS function was in operation. To achieve this, the team used an accurate, energy-efficient GPS module that Epson had designed for mobile devices.

Generally speaking, GPS modules use a high proportion of the energy consumed by mobile devices. This means that an efficient module can contribute significantly to the energy consumption of the product overall. Epson leveraged its many years of experience of designing and marketing GPS devices to create a module that achieved the aims of the design team.

The next step was to create an algorithm to improve the accuracy of the distance data. GPS positioning data accuracy can be adversely affected by a wide variety of factors, including the reflection of electronic waves from high-rise buildings. The diagram on the left below shows how positioning data recorded in a high-rise urban environment can be recorded as 60% greater than the actual distance run. However, Epson managed to greatly reduce discrepancies by employing a specially-designed algorithm.

The third point was to make the product light and compact. Diagram 2 below shows the shape and mounting layout of conventional GPS running devices. The antenna is mounted in such a way that it points to the sky when you attach the device to your wrist and start to run. However, the angle of the mounting requires the device to be a certain thickness. Epson therefore designed an antenna with a new shape and a wider reception angle, and achieved a thin design by mounting the antenna alongside the battery

Epson also took care to make the thin design water resistant and minimize the number of components used. These efforts combined to enable the creation of a running monitor whose compactness, thinness and lightness makes it possible for runners to wear unobtrusively.

By combining its compact, energy-saving, and high precision technologies, Epson has been able to develop a unique GPS running monitor capable of meeting the needs of runners.

* As of November 2012 this product was only available in Japan.