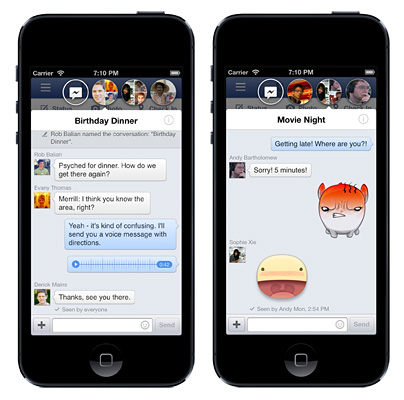 Facebook has updated its mobile app for iOS. Version 6.0 brings Chat Heads to the iPhone and iPad, stickers and some design refinements. Unlike Chat Heads for Android however, Chat Heads on iOS is confined to within the Facebook app and can only handle Facebook messages without support for SMS. We're unlikely to see a system-wide Chat Heads implementation because of the way iOS sandboxes apps.

The updated Facebook app also includes Stickers for messaging, which should be familiar to anyone who's used other messaging apps like LINE - they're essentially large, illustrated emoticons. Chat Heads and Stickers are being rolled out to users who install Facebook 6.0 over the next few weeks.

The update also refines Facebook's News Feed with a 'cleaner design'. The changes are more noticeable on the iPad, which take advantage of the iPad's larger screen. Avatars are shifted to the left, the reading column is thinner and most of the fonts have been scaled up for easier reading.