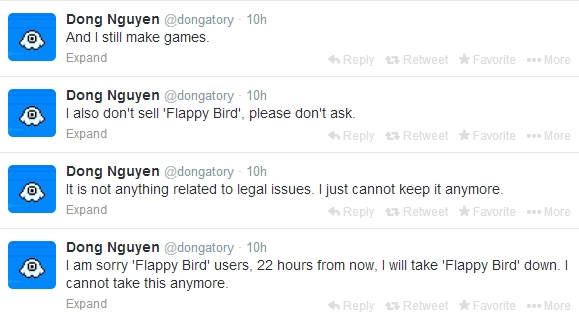 Flappy Bird may be pulling in US$50,000 a day in ad revenue for its creator, but he has decided to take down the app.

Vietnamese developer Dong Nguyen posted a tweet last evening claiming that Flappy Bird "ruins his simple life" and he hates it. Hours later, Nguyen announced on his Twitter that he will be taking down the app "22 hours from now"  as he "cannot take this anymore".

He did not give further details on his decision, but shared that it has nothing to do with legal issues. Nguyen also said that Flappy Bird is not for sale.

Nguyen launched Flappy Bird last May, but it only took off recently with over 50 million downloads. Flappy Bird is the top most downloaded app in over 100 countries.

If you haven't tried Flappy Bird, you may want to download it now on the Apple App Store and Google Play Store. You have only a few more hours to do so!