Globe Telecom held over the weekend the ceremonial launch in Davao City of the USD 250-million Southeast Asia-United States (SEA-US) submarine cable system which is part of Globe Telecom’s commitment to provide faster transmission, more efficient connectivity and greater network resiliency in Mindanao and the rest of the country.

Outside of Luzon, the 14,500-kilometer undersea cable is the first direct connection of Globe to the United States via Guam, Hawaii, and California, offering faster transmission of data to the US. It supports ongoing efforts of Globe to further enhance its services in Mindanao such as the establishment of a data center in Davao City designed to address the growing information and communications technology requirements of BPOs, financial institutions, Internet service providers, and other content providers in Southern Philippines.

The ceremony was led by Presidential Communications Operations Office (PCOO) Secretary Martin Andanar who thanked Globe in behalf of the President for the company’s “invaluable contribution to the telecom industry and for improving Internet connectivity through the SEA-US submarine cable system.” 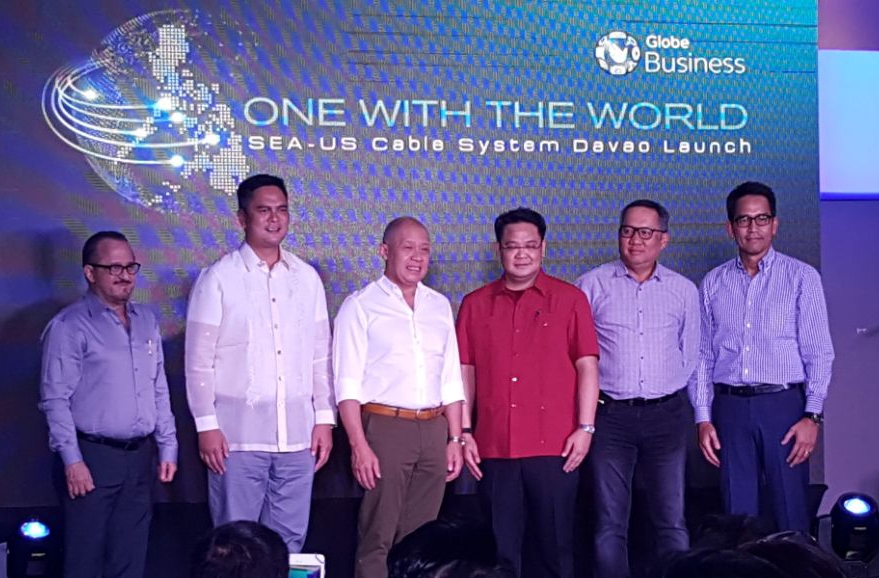 “We are excited about this new investment because of the immense benefits that the undersea cable system will bring to the Philippines.  It will enable businesses to thrive and prosper with First World Internet connectivity at cost-efficient rates in support of the government’s efforts to make the Philippines become globally competitive.  This will also make our network future-ready in anticipation of our customers’ growing bandwidth requirements,” said Ernest L. Cu, Globe President and CEO.

Globe invested USD 80 million for this new undersea cable system. This is on top of the USD 750 million capital expenditure of the company this year to enhance its data capacities. The annual investment is being utilized for LTE deployment using the 700MHz, 1800MHz, and 2600MHz frequencies. With a more pervasive mobile LTE data, Internet speeds have markedly improved based on international benchmarking studies.