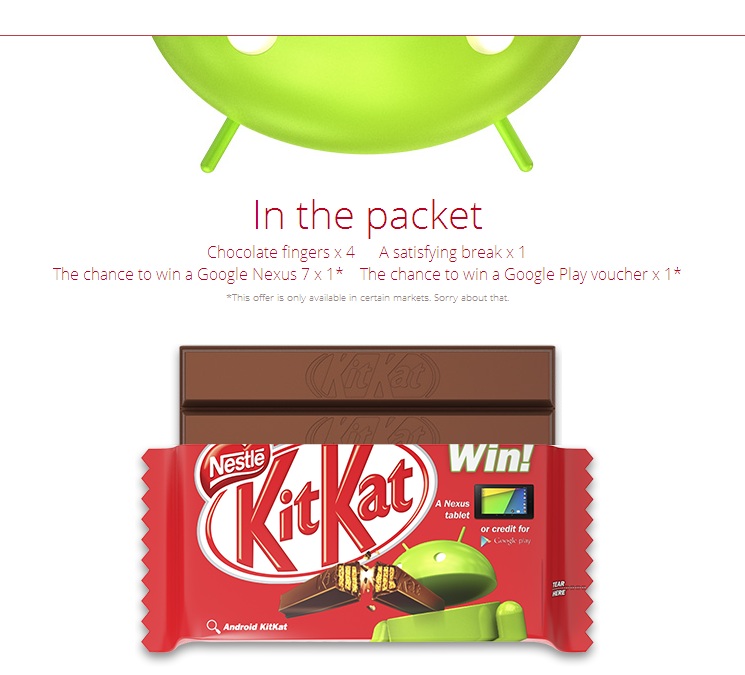 Google just announced that the next version of Android will be named "KitKat" from that popular chocolate wafer bar sold all over the world. This will be the first time that an Android version will be named based on a licensed sweet treat. KitKat trademark is owned by Nestle and the deal regarding this partnership started John Lagerling, Google Director of Android Global Partnerships, called Nestle in November 2012. The partnership was made final in February 2013 at the Mobile World Congress held in Barcelona.

According to reports, there is no monetary exchange involved but only significant amount of marketing for both sides. 50 million KitKat bars available in 19 countries will have Android branding, and will offer consumers a chance to win a Google Nexus 7 tablet and Google Play gift cards.

In case you are wondering about the name chance, The Verge reports that a Google spokesperson informed them that KitKat bars have always been Android Engineering Head Hiroshi Lockheimer's favorite candy bar. It appears that it would be the trigger for a sweet partnership between Google and Nestle.