Google just announced on its blog the LG Nexus 5 and Android 4.4 KitKat.

Besides integrating SMS into Hangouts, Android 4.4 KitKat allows you to make calls easier by  helping you search across your contacts, nearby places, or even Google Apps accounts directly from within the app.

Google also slimmed down the Android's memory footprint with KitKat by removing unnecessary background services and reducing the memory consumption of features that you use all the time. The optimizations not only occur within the OS, but also across Google services such as YouTube and Chrome. As a result of these optimizations, Android 4.4 KitKat can now run on devices with 512MB RAM. This is part of Google's dream to reach the next billion users.

Android 4.4 KitKat also brings a new camera feature, HDR+ where it takes multiple photos at once and combines the best portions of each photo together to create an image of better quality. Google claims that HDR+ will make lights appear more natural, faces more visible and moving objects more in focus.

Search is now on every home screen of Android 4.4 by default. Similar to what's implemented in Moto X, you can say "Okay, Google" to get search up and running any time you want.

Google Now is also improved. Accessed now via a swipe from the left side of the screen, Google Now is fine-tuned to focus on answering questions and features new types of cards. Crowd-sourced data is also utilized to make better recommendations.

Android 4.4 KitKat is now available via the Android Open Source Project. It will soon be available on the Nexus 4, Nexus 7, Nexus 10 and the Google Play Edition devices in the coming weeks. 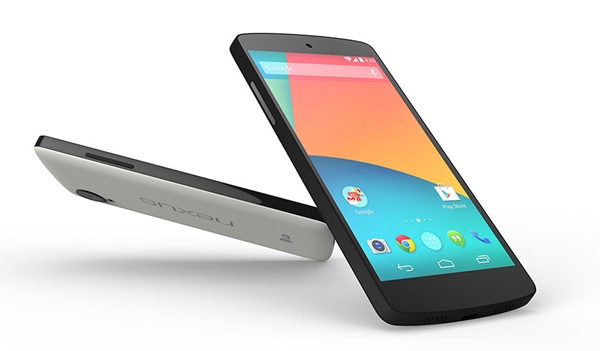 There is nothing that we don't know about the LG Nexus 5 as leaks were plentiful in the past few days. As a recap, the Nexus 5 sports a 4.95-inch Full-HD IPS display, Qualcomm Snapdragon 800 quad-core 2.26GHz processor, 2GB RAM, 8-megapixel rear camera with Optical Image Stabilization, a 2,300mAh battery and built-in wireless charging.

For consumers who are concerned about 4G LTE support in the Nexus 5, the device sold in North America will not be compatible with the LTE bands used in Philippines. However, the website states that the Nexus 5 sold in the rest of the world supports LTE bands 3 and 7, which are 1800MHz and 2600MHz. These two bands are used by the telcos here for their 4G LTE networks.

The Nexus 5 is now available on Google Play Store in the U.S, Canada, U.K., Australia, France, Germany, Spain, Italy, Japan and Korea. It also will be coming soon to India. The 16GB model will cost US$349 while the 32GB model is priced at US$399.

According to LG's press release, offline availability in Europe, Central/South Americas, Asia, CIS and the Middle East will begin in mid-November. There is still no information if the Nexus 5 will be available in the Philippines.