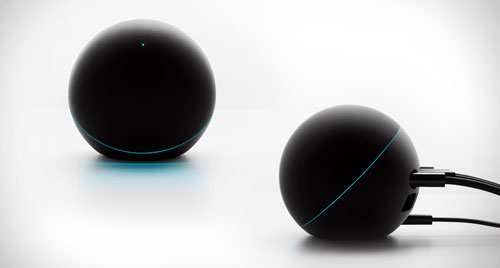 A strange, orb-like device was unveiled to participants present at Google I/O; a yearly event catered for developers which swung into full gear earlier this morning. After a brief introduction made by Google on the curious object, it became apparent that rumors about Google's hush-hush developments on a home entertainment device wasn't hogwash after all. Known as the Nexus Q, this gadget is essentially a "social streaming hub", one which attaches itself to your HDTV (or other home audio devices), and comes equipped with cloud-streaming facilities as well.

But what sets the Nexus Q apart from conventional media players is its ability to pull cloud content via your Android smartphone or tablet, plus the ability for you to create and share playlists of music and video clips among your closest chums. These features, of course, also differentiate the Nexus Q from its closest rival - Apple TV. But hang on, there's more. The Nexus Q also doubles up as a 25W amplifier with enough muscle to power a simple pair of bookshelf speakers. And similar to Sonos' range of music streaming devices, we understand that it's possible to sync and stream audio to various units of the Nexus Q across multiple rooms too.

It appears that this little orb is quite a wireless maestro as well, given that Google's streaming hub is packed with a host of wireless features, such as 802.11b/g/n, NFC, and Bluetooth capabilities. On top of that, a capacitive touch sensor also enables users to mute the audio if need be. Oddly, the Nexus Q will carry Android 4.0 (Ice Cream Sanwich) instead of the newly released Android 4.1 (Jelly Bean), while other hardware specifications include a dual-core OMAP4460 processor, 1GB worth of RAM, and 16GB of local storage space. Google will commence shipment in mid-July, and you can expect the Nexus Q to be priced at US$299 for a start.

No word on whether Google is planning to ship the Nexus Q to Asia as yet, but rest assured we'll let you know as soon as we find out. Watch this space.

Source: The Verge and PC World