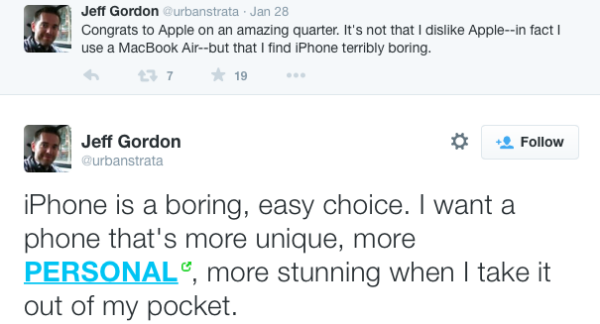 The Apple iPhone 6 and 6 Plus are the hottest smartphones today with nearly 75 million units sold last quarter, but a senior executive from a rival company feels otherwise.

Jeff Gordon, HTC's senior global online communications manager, shared on Twitter that he finds the iPhone "terribly boring". While he does not dislike Apple and uses a MacBook Air, he feels that "the iPhone is a boring, easy choice". Gordon wants "a phone that's more unique, more personal, more stunning" when he takes it out of his pocket.

It is possible that Gordon is referring to HTC's upcoming Android flagship smartphone, the One M9 (codenamed Hima) which is expected to be unveiled on March 1st in Barcelona. The One M9 is rumored to sport a 20.7-megapixel rear camera, a 5-inch Full-HD display, Android 5.0 Lollipop, HTC Sense 7, a Qualcomm Snapdragon 810 chipset, 3GB RAM and a 2,840mAh battery.

Last month, Gordon tweeted that consumers can expect to be blown away by HTC's 2015 roadmap which he claims to be the best ever with "some huge surprises". So far, HTC has announced the Desire 826 at CES 2015. We will be reporting live at HTC's launch event on March 1st, so keep your eyes peeled to HardwareZone for the latest information.

Previous Story
Samsung Unpacked event is on March 1, teases with a curvy Galaxy phone
Next Story
Is Google planning to use its driverless cars to compete with Uber?