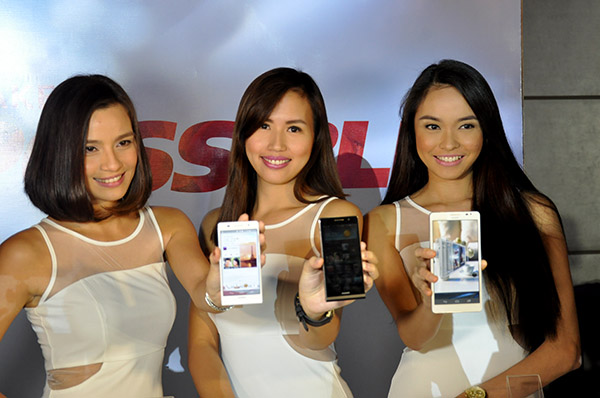 Huawei just launched the world's slimmest smartphone, the 6.18mm thick Ascend P6, and the supersized pocket cinema phablet, the Ascend Mate in the Philippines. Both products redefine how consumers see the mobile landscape. The Ascend P6 isn't just about being slim and sexy as it also promises great imaging performance and a renewed user interface. Meanwhile, the Ascend Mate combines a tablet and a smartphone to provide all your entertainment, communication, and work needs. As the flagship smartphone of the Ascend P series, the Ascend P6 embodies a cutting-edge design with its brushed metallic look and naturally curved base. It isn't all about being fashionable when it comes to this phone as it balances its sleekness with user-friendly functions and amazing features.

"The HUAWEI Ascend P6 is a star among smartphones with its industry-leading design, high-quality camera, and intuitive user interface, HUAWEI's proprietary Emotion UI," said Johnson Ma, Country Manager of Huawei Device Philippines. "Building on the success of our Ascend P series of fashion smartphones, the HUAWEI Ascend P6 provides unsurpassed technology and a design that is simply stunning."

The Ascend P6 is ultra slim at 6.18mm and weighs just about 120g. It runs on a HiSilicon K3V2 1.5GHz quad-core processor, 2GB of memory, and Android 4.2.2 Jelly Bean and features a 4.7-inch HD in-cell LCD, 8MP rear and 5MP front camera, and 2000mAh battery. As for storage, it has 8GB of built-in storage and is expandable via microSD (up to 32GB). Following the fashion roots of the Ascend P line, the Ascend P6 is available in black, white, or pink. Having a screen-to-body ratio of 73%, the Ascend Mate maximizes your viewing pleasure for emails, documents, videos, or games. It is also slim and stylish, designed to comfortably fit in a single hand at just 6.5mm thick at its narrowest part.

"The HUAWEI Ascend Mate breaks barriers to deliver a supercharged entertainment, communication, and creative experience for all your personal and professional needs," said Johnson Ma, Country Manager of Huawei Device Philippines. "The HUAWEI Ascend Mate is an industry-leading smartphone and tablet in one and showcases our innovation as we continue to make great technology available to more people globally and locally."

This phablet features a 4050mAh battery and the company's very own HiSilicon 1.5GHz quad-core processor. With HUAWEI's proprietary Quick Power Control and Automated Discontinuous Reception smart power-saving technology, it is capable of lasting up to two days on ordinary usage on a single charge. The Ascend Mate runs on Android 4.1 Jelly Bean, has 2GB of memory and 8GB of internal storage, comes equipped with a 6.1-inch HD IPS+ screen, and features an 8-megapixel AF rear-facing camera with HDR and a 1-megapixel HD front-facing camera. This model is available in Crystal Black and Pure White colors.