Part of its smart cities initiative, IBM has chosen Makati City as a beneficiary of the Smarter Cities Challenge for 2013. As a beneficiary, Makati will be granted access to the IBM’s experts who will assess the city’s key issues. After a series of thorough research and evaluation, the experts will recommend solutions that will help Makati become a better place for residents and workers. One issue in Makati that IBM could address would be its traffic management system. This year, IBM’s Smarter Cities Challenge included cities that are based in countries like Australia, Brazil, Germany, Kenya, South Korea, Spain, and the United States. For more information, read the press release below. 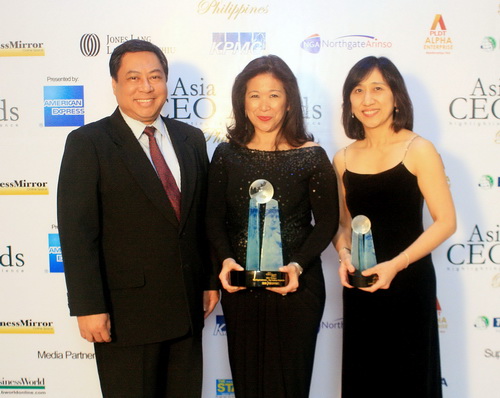 On another note, at the Asia CEO Awards ceremony, IBM Philippines received the top employer award in recognition of its history of managing the world’s finest business and technology professionals. The ceremony was held at the Newport Performing Arts Theater in Pasay City.

IBM announced that it has selected the City of Makati to receive an IBM Smarter Cities Challenge grant (#smartercities) for 2013. The grant provides Makati City with access to some of IBM's top experts to analyze and recommend ways to become an even better place in which to live and work.

Launched in 2011, the IBM Smarter Cities Challenge is a three-year, 100-city, US$50-million competitive grant program. The program, which is IBM's single-largest philanthropic initiative, assigns a team of six top IBM experts to each winning city to study a key issue identified by the city's leadership.

Well before the team arrives for its three-week pro bono consulting engagement valued at approximately US$400,000, the IBM volunteers are already hard at work studying the city's issue. Upon arrival, the team works with city officials to analyze data, and solicit the input of dozens of local agencies and advocacy groups. IBM then provides detailed recommendations for how the city might efficiently and effectively address the issue.

For year-three of the IBM Smarter Cities Challenge, cities around the world once again competed vigorously to benefit from IBM's expertise. The winning cities proposed innovative projects and areas of focus. These included strategies that address:

"Congratulations to Makati City for earning an IBM Smarter Cities Challenge grant for 2013. Makati distinguished itself among its peers by convincingly demonstrating its preparation and willingness to make the kind of improvements that will improve its residents' quality of life and become a smarter city," said Stanley S. Litow, IBM vice president of Corporate Citizenship & Corporate Affairs, and President of the IBM Foundation. "We consider it a privilege to share with Makati City the talent and expertise of our most gifted employees. They have premier skills in a range of disciplines -- all useful for helping to build smarter cities and a smarter planet."

In 2012, IBM provided expert counsel to 33 cities worldwide who had earned IBM Smarter Cities Challenge grants. These included engagements in:

In the first two years of the Smarter Cities Challenge, IBM completed work in 64 cities globally, deploying nearly 400 of its most talented experts who delivered concrete and measurable results to winning cities.

The need to use innovative approaches that address civic challenges has never been greater. In 2008, according to the United Nations, more than half the world's population began living in cities for the first time. These population centers are more economically powerful, politically influential, and technologically advanced than at any time in history. But they also struggle with increased demand for services, along with budgetary and operational challenges.

Visit the CitizenIBM blog to read about some of the lessons learned during previous IBM Smarter Cities Challenge engagements, and to better understand the challenges that cities face.

The Smarter Cities Challenge is sponsored by IBM's Corporate Citizenship program and IBM’s International Foundation. IBM has been a leader in corporate social responsibility and citizenship for more than 100 years.