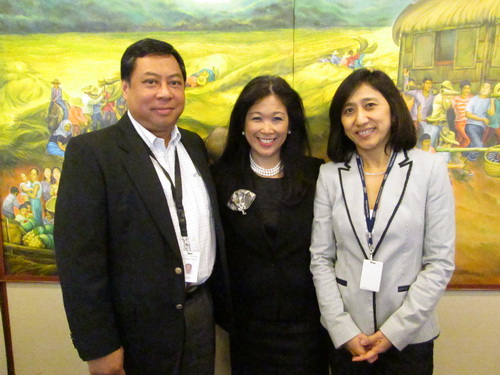 This year, IBM Philippines is celebrating its 75th year in the country. Led by Mariels Almeda-Winhoffer, the company’s first female and 14th President and Country General Manager, IBM hosted a media luncheon today at its office in Eastwood City.

In line with its IBM Corporation’s main goal of making itself essential to the country, community, clients, and employees, IBM Philippines is focused on growth areas like analytics, cloud computing, geo expansion, and smarter cities solutions.

IBM Philippines is active in the field of research and development in order to resolve the needs and issues that Filipinos are facing in areas like flood management, finance, healthcare, and rice production.

IBM Philippines continuously helps underprivileged communities in the country and assists in resolving diseases like tuberculosis. Taking into account the country’s rich pool of nurses, IBM Philippines is chosen by its head office as a major provider of integrated healthcare service. IBM has chosen its office in the Philippines over those based in the ASEAN region and Latin America.

In relation to its agenda of creating smarter cities in the country, IBM Philippines is working with local government units such as Davao in establishing an integrated operations center, the first in the world, by making use of video cameras with analytics capabilities. With the help of these utilities, IBM is helping in accelerating urbanization and improving traffic flow, governance, and calamity management in provinces.

Being a major player in the field of cloud computing, IBM Philippines is also working with companies in improving storage service and accelerating and making the accessing and processing of information within organizations faster with the help of the company’s Software as a Service (SaaS).

Established in 1937, IBM Philippines is now one IBM Corporation’s focus market units. Reaching such a status means that IBM’s head office is allocating substantial resources to IBM Philippines in helping it achieve its numerous projects.

For more information about IBM's celebration of its 75th year in the country, and its new President and Country General Manager, Mariels Almeda-Winhoffer, read the succeeding press release:

MANILA, PHILIPPINES - IBM marked 75 years of enabling business and societal transformation through innovation in the Philippines. The company is experiencing increased demand for its solutions and services in high growth markets in the country including Davao, Calamba and Subic/ Clark areas.

More recently, IBM and the Davao City Government signed a first of its kind agreement to help the city scale-up its existing Public Safety and Security Command Center (PSSCC) to further enhance public safety operations in the city. The IBM Intelligent Operations Center (IOC) solutions will create a smart and safe city by applying advanced technologies to existing infrastructure to improve city management and efficiency.

Today, the company is experiencing increased demand for its solutions and services as businesses and government organizations across the country turn to IT to transform operations and increase global competitiveness. IBM is working with over 400 Business Partners nationwide to better serve clients across many of the local key growth sectors such as banking, telecommunications, retail, etc.

In the past 75 years, IBM has also been contributing to nation-building through strategic support of government initiatives, a wide spectrum of corporate social responsibility programs and outreach to small AND mid-size businesses.

"IBM's success has been and will continue to be enabled by transformation through innovation. We will continue to make a positive impact by leveraging on smarter solutions to advance national priorities, collaborate globally to grow our business further and make IBM essential to our clients and stakeholders, here and the world over, 75 years forward. 75 years is not simply a milestone. Rather, it marks an opportunity to heighten IBM's commitment to the country as the Philippines remain essential to IBM's growth strategy," Mariels Almeda Winhoffer, President and Country General Manager, IBM Philippines.

IBM today has two world class sales and distribution business' offices that looks after the domestic markets and seven global delivery centers operating in Metro Manila and Cebu, that serves over one million client employees in 84 countries across the world, clearly demonstrating that the Philippines is regarded as a country with highly-skilled professionals who have the expertise to manage shared services.

The Philippines has been identified as one of IBM Corporation's 20 focus countries in line with the company's geographic expansion strategy through which it is building out its presence in the fastest growing markets in the world. IBM has also expanded its business and presence beyond Metro Manila in keeping with the country's continued rapid economic transformation.

As President and Country General Manager of IBM Philippines, Mariels Almeda Winhoffer is responsible for IBM's operations in the Philippines, including Sales and Distribution, and IBM's fully-owned subsidiaries offering IT and IT-enabled global delivery services: IBM Solutions Delivery and IBM Global Process Services.

She has been with IBM for 26 years. She started working in IBM while in her senior year in Fordham, and since then went on to hold various executive positions in the company, most recently as Vice President for Industrial Sector (a two billion dollar business for IBM U.S).

She has also held multiple sales leadership roles and executive positions, in Sales and Distribution and Global Technology Services. Prior to her appointment as President and Country General Manager of IBM Philippines, she served under the office of IBM Chairman Sam Palmisano and retired IBM chairman Lou Gerstner, as Client Advocacy Executive.

Ms. Winhoffer was recognized for her contribution to the Asian business community in the United States. She was a recipient of the 2009 Outstanding 50 Asian Americans in Business by the Asian American Business Development Center.