IBM has prototyped a water-cooled solar collector dish that can safely harness the power of 2,000 suns by focusing the sun's rays on hundreds of photovoltaic chips. This High Concentration PhotoVoltaic Thermal (HCPVT) system is capable of converting up to 80 per cent of the collected solar energy. 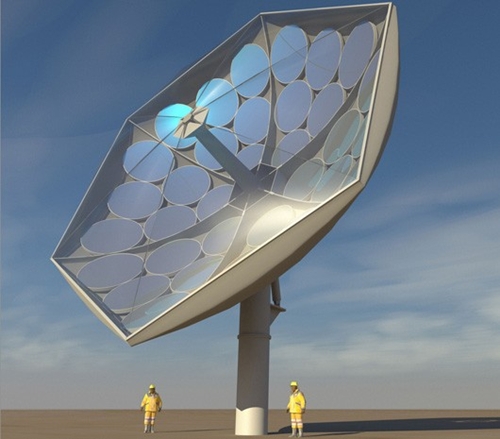 The system is also said to cost three times lower than comparable systems; it utilizes a large parabolic dish made from numerous mirror facets. The dish is attached to a tracking system to determine its optimal position in relation to the sun. The sun’s rays will reflect off the mirrors onto an array of microchannel-liquid cooled receivers with triple junction photovoltaic chips. Each chip measures one centimeter by one centimeter and is capable of generating an average output of 200-250 watts over a typical eight-hour day in a sunny region.

The liquid cooling system of the HCPVT has already been tested in IBM's high performance computers, including Aquasar and SuperMUC; it was actually inspired by the hierarchical branched blood supply system of the human body. According to IBM, the HCPVT system is also capable of providing drinking water as the researchers were able to tweak the liquid cooling system to distill water used in the system. Hence, not only is the HCPVY able to deliver electricity as the system is touted to distill up 30-40 liters of drinkable water per square meter of receiver area in a single day.

In terms of cost savings, the researchers said that the levelized cost of energy will be less than US$0.10 per kilowatt hour (KWh). The HCPVT system is a joint engineering effort between IBM, Airlight Energy and Swiss university partners. For more information on this innovative sustainable energy system, do head over to IBM Research's site here.