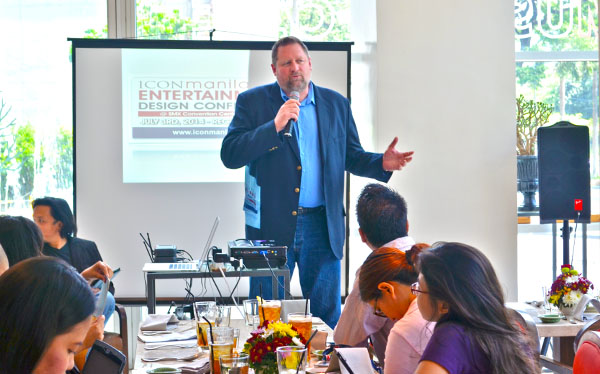 An opportunity for Filipino students and professional designers and graphic artists to view through the entertainment design industry is here with Icon Manila. Top design artists from major animation studios such as Disney Animations, Universal Studios, and Warner Brothers are coming to Manila in July this year to break down the design process for students and professionals working in the entertainment design Industry.

This International Entertainment and Design Conference 2014 is the first of its kind in Asia, featuring top professionals in animation and concept design for feature film, television, and games.

Speakers at the conference have decades of tenure and are esteemed members in their fields of expertise. All have relevant experience working with industry giants such as Walt Disney, Universal Studios, Nickelodeon, Warner Brothers, Sony Animation Pictures, and Marvel productions among the others. Artists include Tony Bancroft for Animation Directing, John Butiu for 3D Animation and Modeling, Vance Kovacs for Film Design Concept, Armand Serrano for Visual Development, Stephen Silver for Character Design, and lastly, Marcelo Vignali for Production Design and Art Direction.

“The conference targets students and professionals alike,” shares Armand Serrano, Entertainment and Design Conference organizer, who has worked on animations like Lilo and Stitch, Brother Bear, and Mulan. “With our impressive lineup of top industry leaders, our objective is to present a progressive view through the entertainment design process and impart new ideas that will ultimately strengthen Asia’s impact on the industry.”

The Entertainment and Design Conference will be held on July 3, 2014 at the SMX Convention Center. Proceeds of this conference will be used for humanitarian and educational causes here in Manila and the areas affected by Yolanda. For more details, visit www.iconmanila.com