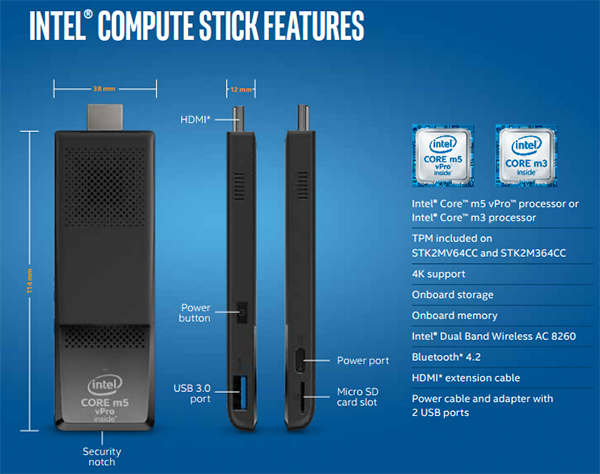 Intel’s concept of a computer-on-a-stick opened quite a few doors in the space of mobile computing, but the original Compute Stick frankly failed to impress because of its stuttering performance and other limitations. Nevertheless, Intel appears committed to the form factor because it has announced more powerful versions of the Compute Stick that will be equipped with the latest sixth-generation Intel Core m processors.

We first got wind that the update was coming back in September, and Intel is now back with further details on its beefed-up stick PCs. They will ship with either an Intel Core m5-6Y57 (1.1GHz, 4MB cache) or Core m3-6Y30 (0.9GHz, 4MB cache) processor, 4GB of DDR3 1,866MHz dual-channel memory, and 64GB of eMMC storage.

In addition to the more powerful processor options, the new specifications represent a doubling of the onboard memory and storage over the first Compute Stick, which should improve multi-tasking performance and allow you to install more productivity software on it.

Networking capabilities have also been upgraded with a 2x2 Intel Dual Band Wireless-AC 7265 module with support for 802.11ac Wi-Fi and Bluetooth 4.1. On top of that, Intel also included two extra USB 3.0 ports on the power adapter itself, so you can now plug in a wired keyboard and mouse and still have one more port left over.

The different SKUs and their prices are listed below:

The lower-powered Atom SKU is already in production, while the Core m units are expected to be in production by February.

Previous Story
G.Skill introduces their fastest DDR4 128GB memory kit clocked at 3,000MHz
Next Story
Apple cannot track how many people are using its News app due to a glitch