Japan Display, a joint venture between Hitachi, Sony, Toshiba and Innovation Network Corporation of Japan (INCJ), has created a paper-like, low-power LCD display panel that makes use of reflected light but is capable of displaying color video. 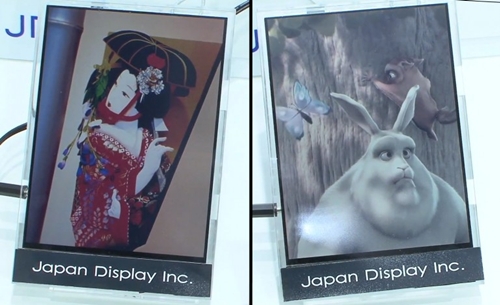 This new display technology essentially replaces the backlight found in conventional LCDs with a reflective electrode. The new LCD display technology comprises three components; a rear reflective layer, a liquid crystal layer in the middle and light control layer on top. Ambient light is reflected from the rear layer and passes through the center liquid crystal layer to produce a monochrome image. Colors are added to the image by the color filters embedded in the top light control layer. This results in a color LCD panel with a paper-like quality.

Japan Display said that they have developed two 7-inch prototype display panels and first version "...has a reflection rate of 40 percent and is able to produce five percent coverage of the NTSC color gamut, while the second boasts a higher color purity with the ability to cover 36 percent of the NTSC color gamut.". The company also stated that both display panels are not capable of 100 percent reflection rate at the moment but they pointed out the display panels' low power consumption rates of only three milliwatts when displaying still images. Japan Display’s Kazunori Yamaguchi said that the first version display panel is ready for mass production while the second one needs work. The new screens were on display at the FPD International 2012 exhibition in Japan last week.