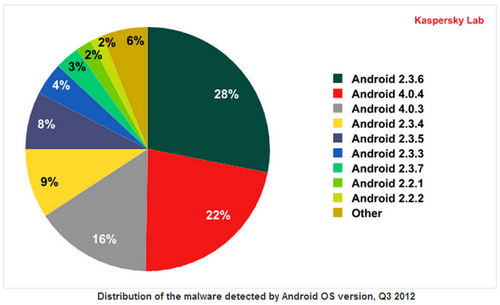 Consistent with the report released by Trend Micro, Kaspersky Lab revealed that cybercriminals these days heavily concentrate on Android, taking into consideration the popularity of smartphones and tablets that use the said platform. But Kaspersky Lab goes into details by specifying which Android versions are the key targets of cybercriminals. In their Q3 2012 report, the security software company pointed out 2.3.6 (Gingerbread) and 4.0.4 (Ice Cream Sandwich) are the most popular targets of cybercriminals. Some categories of malicious threats which Kaspersky Lab identified as the most common on Android devices are OpFake, Plangton, FakeInst, and SMS Trojans. The press release below provides additional details associated with the report.

Analysis of mobile malware for Android OS by Kaspersky Lab, a leading developer of secure content and threat management solutions, security experts in Q3 2012 revealed that the most popular targets among cybercriminals were Android versions 2.3.6, or ‘Gingerbread’, and 4.0.4, also known as ‘Ice Cream Sandwich’.

The rapid growth in the number of new mobile malicious programs for Android continued in the third quarter, prompting the specialists at Kaspersky Lab to identify the platform versions most frequently targeted by cybercriminals. Android 2.3.6 Gingerbread accounted for 28% of all blocked attempts to install malware, while the second most commonly attacked version was the new 4.0.4 Ice Cream Sandwich, which accounted for 22% of attempts.

“Although Gingerbread was released back in September 2011, due to the segmentation of the Android device market it still remains one of the most popular versions, which, in turn, attracts increased interest from cybercriminals,” said Yuri Namestnikov, Senior Malware Analyst at Kaspersky Lab. “The popularity of the most recent version of the Android OS – Ice Cream Sandwich – among virus writers can be explained by the fact that the devices running the latest versions of the OS are more suitable for online activities. Unfortunately, users actively surfing the web often end up on malicious sites.”

More than one half of all malware detected on user smartphones turned out to be SMS Trojans, i.e. malicious programs that steal money from victims’ mobile accounts by sending SMS messages to premium rate numbers.

The OpFake family has become the most widespread (38.3% of all the malicious programs detected for Android) among all the mobile malware families. All the programs in this family disguise themselves as OperaMini. A fifth of the malicious programs detected on user devices are versatile Trojans, most of which belong to the Plangton family. After being installed on a device, these Trojans collect service data on the telephone, send it to the command server and wait for the cybercriminals’ commands. Specifically, malicious programs in this family can stealthily change bookmarks and the home page. Third place in the ranking was taken by the FakeInst family, whose members pretend to be installers for popular programs (17%). These two types of malware are mostly distributed via so-called alternative app stores created by cybercriminals.

Mobile threats of this kind can be neutralized with the help of dedicated mobile applications. For example, in addition to reliable protection against information theft via malware, Kaspersky Mobile Security and Kaspersky Tablet Security also ensure data stays safe even if a device is lost or stolen.

The full version of the report “IT Threat Evolution: Q3 2012” is available at securelist.com.