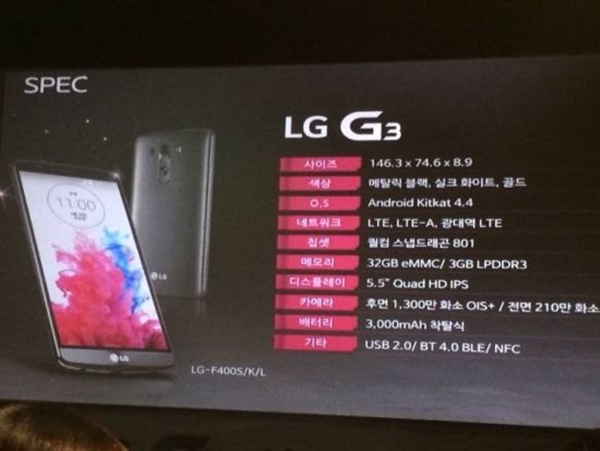 We are just five days away from the regional launch event of the LG G3, but it seems that someone stole LG's thunder by leaking its full specs.

According to GforGamers.com, someone managed to take pictures of the presentation slides at an early preview event. Similar to the specs leaked earlier this month, the G3 will sport a 5.5-inch QHD (2,560 x 1,440 pixels) IPS display. If Samsung does not announce the Galaxy S5 Prime before 27 May, LG will be the first major phone manufacturer to bring QHD displays to the mass market aside from the Chinese companies, Vivo and Oppo.

The G3 will be powered by a Qualcomm Snapdragon 801 quad-core processor, 3GB RAM, and Android 4.4 KitKat, which will put it on-par with the Sony Xperia Z2. Other specs include a 3,000mAh battery, 32GB internal storage capacity, LTE and LTE-Advanced connectivity, Bluetooth 4.0 BLE, NFC, and a 8.9mm thin chassis. 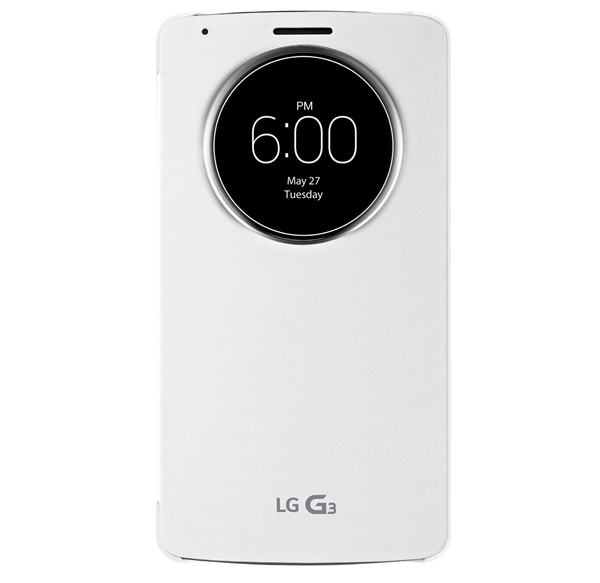 LG also announced a preview of the QuickCircle case for the G3, which is a folder-style case for users to enjoy various features of the phone without having to open the cover. Right from the circular window, users can access the time, calls, text messages, camera and music apps, and get an update of their health.

The QuickCircle case also brings wireless charging capability to the G3 as it is compatible with the Qi interface standard. LG states that a software development kit (SDK) will be available next month to allow developers to customize their apps to perform customized functions with the QuickCircle case.

The case will be available in five colors: Metallic Black, Silk White, Shine Gold, Aqua Mint, and Indian Pink. Check out the video below to see a preview of its functions: