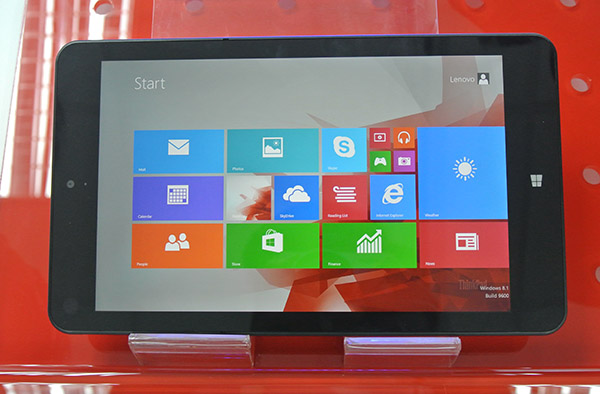 The ThinkPad 8 is a premium 8-inch tablet constructed out of machine-cut aluminum. It comes as a portable device equipped with all the technologies professionals need without sacrificing the ability to connect a keyboard and/or a display for that full PC experience. it can be used in Tablet ode or Tent mode when you have the optional Quickshot Cover. One can also opt for Desktop mode, and use it connect it to the optional keyboard base, dock, or monitor.

The promise of a full PC experience is provided by a 2.4GHz Intel Bay Z3770 quad-core processor, 2GB of memory, and 128GB of internal storage. On the front is a super bright Full HD (1920 x 1200 pixel resolution) display. The tablet is capable to expand into desktop PC by attaching it to a Thinkpad USB 3.0 dock station. Business users will be more productive at their desk by connecting a second LCD monitor, USB keyboard, and desktop storage device into the Thinkpad USB 3.0 dock. It also comes with a microUSB 3.0 port and a full Windows 8 Pro experience suited for professional needs.

This tablet can actually allow users to capture photos and videos easily with the Quickshot cover. All a user needs to do is peel back the tablet’s cover to expose its 8 MP high-definition camera, thereby triggering the camera app to open. Users can view and edit photos and videos, and transfer them wirelessly using Miracast technology. It is also possible to view photos and videos on a larger display via its microHDMI port. The new X1 Carbon is uncompromisingly light, weighing only 2.8 pounds, and is virtually indestructible. Considered as the lightest 14-inch Ultrabook in the world, it packs all the power and durability that the modern professional requires. Born from the same stock as aircrafts and racing cars, the X1 Carbon is forged from Carbon Fiber, which weighs less than magnesium and aluminum, but is stronger than both.

With a reputation for pushing boundaries in both design and usability, the new X1 Carbon adapts to the way users work. Its Adaptive Keyboard feature, for instance, dynamically adjusts based on the software or application being used. The new Ultrabook also integrates voice and gesture control, allowing users to interact with their PC in a modern and more familiar way.

The New X1 Carbon also improves the viewing and touch experiences for users. Its new ColorBurst Display provides sharper, brighter images at higher resolutions for a superior visual experience whether one is watching a movie or creating a presentation. Designed for customers who are always on the move, the new X1 Carbon uses Rapid Charge technology, providing 80% charge in less than one hour. Coupled with up to 9 hours of battery life (over 70% improvement from the last generation) and optional built-in 4G capability, it can actually provide all the mobility and connectivity that users may need wherever they go.

For customers who require improved docking experience, the new X1 Carbon uses a special connector called the OneLink which helps eliminate cable clutter. This allows users to get power, Gigabit Ethernet, and dual-display support through a single cable via ThinkPad OneLink docking solutions.

Providing high performance docking via a single cable, the ThinkPad OneLink Pro Dock offers multiple USB ports, audio and Ethernet connections and comes with a driver-free dual video support through DisplayPort and DVI (on selected models). Its fully integrated 90W AC adapter also provides power for the notebook while supporting rapid charge. It can also charge other devices such as a smartphone.