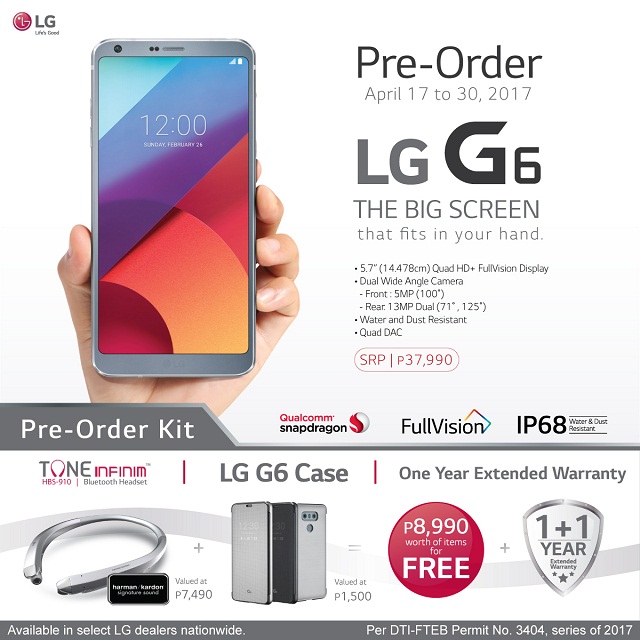 A couple of months after its initial appearance at the Mobile World Congress (MWC) in Spain, the LG G6 is now expected to arrive in the Philippines this month. But prior to its local launch, the Korean company behind it is trying to hype things up and to make its arrival more exciting, the LG G6 will be available for pre-order from April 17 to 30. Making the pre-order deal more irresistible, LG Philippines is bundling the pre-ordered G6 units with an LG Tone Infinim (PhP 7,490) and an LG G6 case (PhP 1,500), or equivalent to a total of PhP 8,990 worth of items for FREE. In addition, patrons who will avail of the pre-order promo will get an extended one-year LG warranty. The G6 is locally priced at PhP 37,990. Customers must place the pre-order during the promo period by paying PhP 3,000 down payment in cash or via a credit card at any participating store or LG concept store nationwide.

“We are excited to bring the LG G6 to the Philippines very soon. We’re inviting everyone to explore the world through the lens of the LG G6. We believe we’ve produced the perfect companion to tech-savvy lifestyle of today’s generation. The LG G6 has been acclaimed with positive feedback since it was launched a few months ago, and we believe that the Filipinos will also find our latest flagship truly exciting,” said Jay Won, vice president of LG Mobile Philippines.