Also seen at the recent appliance and home theatre showcase, the LG Pocket Photo Printer is a palm-sized pocket printer which instantly prints any photo taken from mobile phones using inkless paper. About the size of a palm, the portable device functions on zero ink, so customers need not worry about replacing ink cartridges. This is made possible because the ZINK (Zero Ink) photo paper 2.0 (measuring 3 x 2 inches in size) guarantees high-quality photos are printed immediately, with the printer heating up the dye crystals embedded inside the paper to trigger it to change colors according to the photo.

For those who can recall, Dell's Wasabi printer from 2009 made quite a splash back then and was one of the earliest mass commercial product to use this similar print technology. Unfortunately it was discontinued shortly after it was introduced. Given that LG doesn't do print or imaging products, it's banking highly on its mobile phone ecosystem to provide users a convenient solution to print photos anywhere in a small form factor - 121mm tall, 72mm wide, 24mm thick. That's just slightly larger than the original iPod, but twice its thickness. 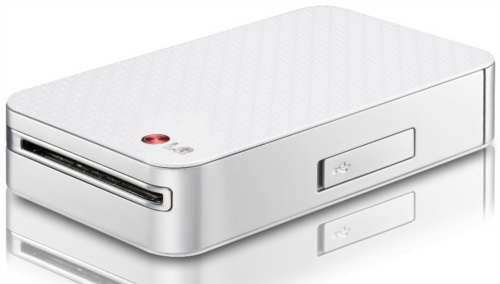 In silver and a metallic finish, the Pocket Photo Printer allows you to print your photos by transferring them instantly from Android phones via Bluetooth and NFC-tagging connectivity. There's also its Smart Editing Function available via the LG Pocket Photo App which can be downloaded from the Google Play Store. The function lets you customize each printed photo with various photo frames for invites, birthday cards, and even proposals. Users can also apply different styles on the photos by adding filter effects to change the photos' color tones, or pick and select from different partition options for passports, ID cards, and business cards.

Compatible with Android 2.2 Froyo and later, D-Days (reminder note for special days), messages, and even QR Codes can be created with the Pocket Photo App and instantly linked to social networking sites such as Facebook, Twitter, and YouTube when scanned. When fully charged, the LG Pocket Photo Printer can print up to 15 sheets.

The Pocket Photo Printer and the Zink Media Photo Paper (a pouch of 30 sheets) is available at S$249 and S$18 respectively in Singapore. Locally, there's still no word on pricing but availability will be on either April or May 2013.