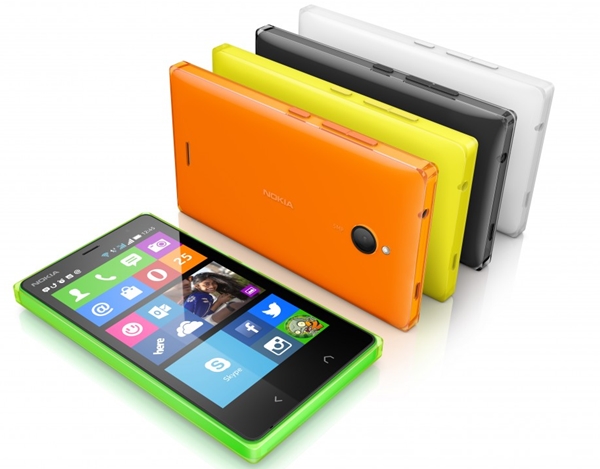 Microsoft unveiled the Nokia X2 (not to be confused with their older X2 launched a few years back), its latest member to the Nokia X family that debut at Mobile World Congress 2014 four months ago.

The X2 sports a slightly bigger ClearBlack display at 4.3-inches, but retains the same resolution (800 x 480 pixels) as the X. The processor is also upgraded from a Snapdragon S4 to the newer Snapdragon 200 dual-core 1.2GHz chipset. The RAM is doubled to 1GB RAM, which should bring smoother navigation to the X2 as compared to the X. In addition, the X2 comes with a 5-megapixel rear camera and a 1,800mAh battery.

Aside from the specs upgrade, the X2 comes with two notable improvements in the design and software platform. Dubbed the "Inner Glow" design, Microsoft added a new translucent outer layer to the chassis. Navigation on the X2 is made simpler with the addition of a Home button.

The X2 ships with the latest Nokia X software platform 2.0 that brings several new features. Instead of having three tiles side by side, the X2 will now have four. An App List, similar in concept to Windows Phone, is also added to the interface where you can scroll through the apps that you have installed on the phone. Other improvements include a new camera interface and a better virtual keyboard.

If you are a fan of Opera web browser, you will be happy to know that Opera is the default browser for the entire range of Nokia X smartphones. The Opera browser will offer a faster web browsing experience and helps minimize data consumption via its Opera Turbo compression service. This feature compresses data before it reaches the device, hence savings can be significant for consumers who are on a pay-as-you-go data plan or roaming while travelling.

Due to hardware limitations, the Nokia X software platform 2.0 will not be available for the Nokia X, X+ and XL. However, Microsoft promises updates in the coming months that will further improve the user experience on these devices.

Microsoft states that the X2 is available immediately in select countries globally. Since the XL was recently launched on June 21, we reckon it might take some time for the X2 to arrive in Singapore. As usual, the X2 comes in a range of colors including glossy green, orange and black, glossy green, white and matte dark grey. Its retail price is €99 (S$168 based on currency rates at press time) before taxes and subsides.

If you had any doubts about the Nokia X series when it was first launched and if the company would still adopt an Android OS variant as its OS, the release of the X2 marks Microsoft's first Android-based product since it had acquired Nokia and a firm direction for its low-end smartphone devices. We guess the Nokia X software platform is here to stay and offer existing Asha series users an easy and affordable path to the smartphone ecosystem from a trusted brand.