Forget Windows 9 or Windows TH; Microsoft has announced that the next major version of Windows will be called Windows 10.

Due in late 2015, with an early technical preview dropping in a day’s time on October 1, Windows 10 will sport an updated interface and user experience and enhanced security and management capabilities for businesses. According to Terry Myerson, executive vice president of the Operating Systems group at Microsoft, Windows 10 is the “most comprehensive operating system and the best release Microsoft has ever done” for its business customers.

Of course, Windows 10 will matter a lot to consumers too. It will continue Microsoft’s vision of offering a consistent and familiar experience to the different types of devices you use, from Xboxes and PCs, to phones and tablets and tiny gadgets. In Microsoft’s own words, Windows 10 “will run across the broadest range of devices ever from the Internet of Things to enterprise datacenters worldwide”. And a big reason how this is possible is because developers can write universal apps that will work everywhere and there’s a unified app store. 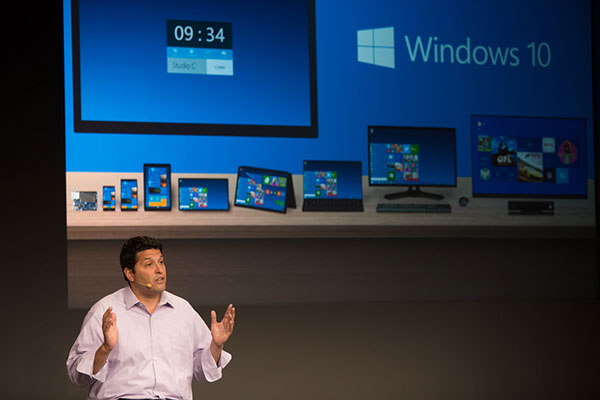 Features at a glance

For those eager to know what are the consumer-facing changes Windows 10 will bring, here’s a list of key ones known so far:

Expanded Start menu: Yes, the familiar Start menu is back. Essentially, it’s a combination of the Modern (a.k.a. Modern) Start screen in Windows 8 and the traditional Start menu, so you’ll find universal apps (Live Tiles are still around) and classic apps. Of course, there’s space to pin your favorite apps, programs, people, and websites. 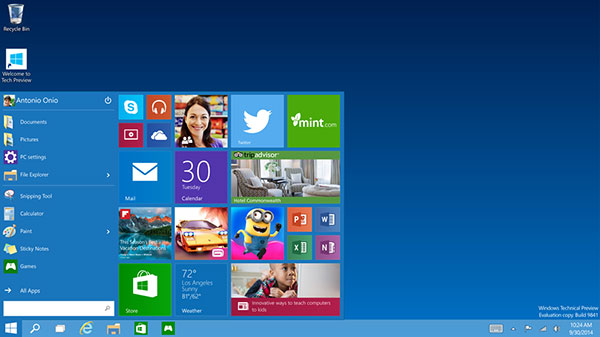 Apps that run in a window: Apps from the Windows Store now open in the same format as desktop programs. They can be resized and moved around, and have title bars at the top, allowing users to maximize, minimize, and close with a click. 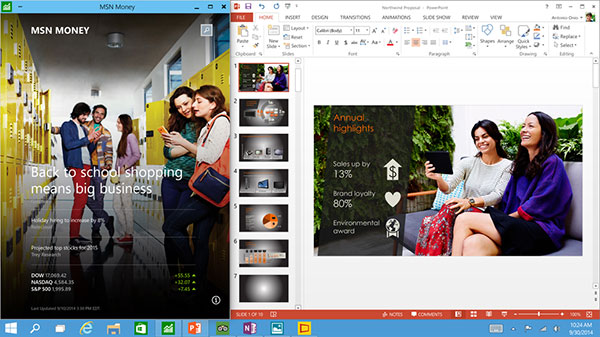 Snap enhancements: A new quadrant layout allows up to four apps to be snapped on the same screen. Windows will also show other apps and programs running for additional snapping, and it will even make smart suggestions on filling available screen space with other open apps. 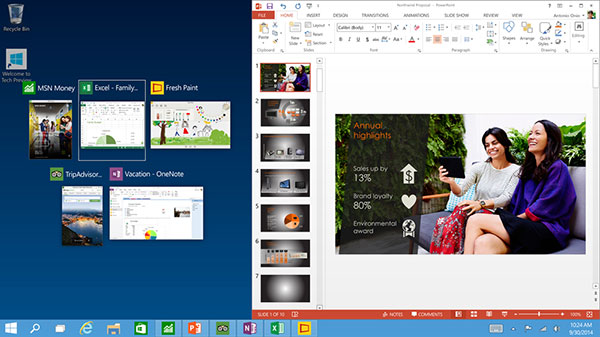 Task view & multiple desktops: There’s a new Task view button on the task bar that lets you see all open apps and files. Much like Expose or Mission Control in OS X, it enables quick switching and one-touch access to any desktop created. Again, much like the Spaces concept in OS X, multiple desktops can be created, so you could have, say, distinct desktops for different purposes and projects. 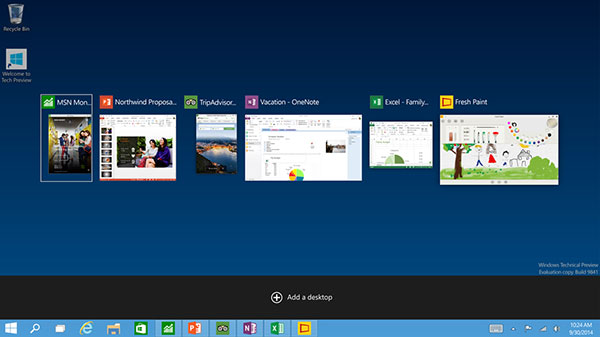 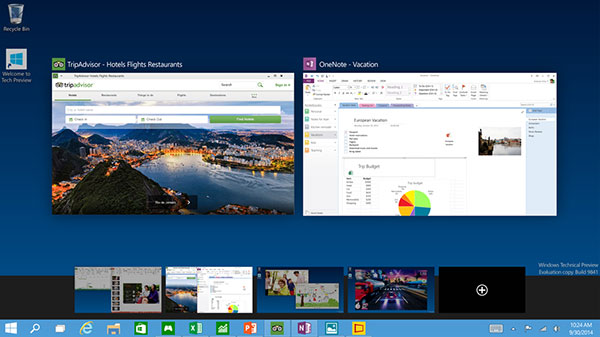 Continuum feature: In short, Windows 10’s UI will change according to the device you’re using or what mode you’re in. For example, if you’re working on the Surface tablet with the keyboard plugged in, the OS will show you the regular desktop. Once the keyboard is removed, it'll switch over to tablet mode (after prompting you), be it a full-screen mode in an app or a more touch-friendly tile interface when you're at the Start screen.

Here's a video by The Verge showing how Continuum works:

Microsoft is also taking the opportunity to introduce Windows Insider Program. Windows Insiders (i.e., the participants) will be able to give feedback on early builds of the OS throughout its development cycle. The program will include various ways for Windows Insiders to engage in a two-way dialogue with Microsoft, including a Windows Feedback app for sharing suggestions and issues and a Windows Technical Preview Forum for interacting with Microsoft engineers and fellow Insiders. More information about this program and the technical preview can be found at http://preview.windows.com.

Update: Microsoft has posted the event video, a Windows 10 intro video, and a video about the Continuum feature over at its YouTube channel. We've taken the liberty to embed them below.