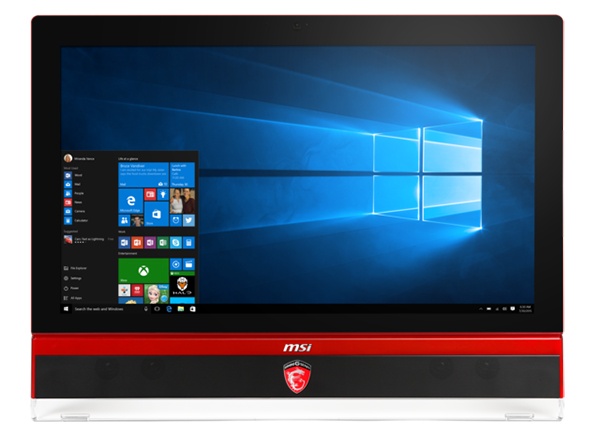 MSI had a whole lot to show off at CES 2016, with something for everyone ranging from system builders to gamers who don’t want to do a whole lot of tinkering. In addition to its special edition all-black Carbon motherboards, it also revealed the compact, high-performance Vortex gaming PC. On top of that, it also showcased a range of PC form factors, including an all-in-one (AIO) gaming system that supports external desktop graphics cards, its Nightblade series of desktops, and the Cubi 2 Plus mini PC. According to MSI, the Gaming 27XT is the world’s first AIO gaming PC to support an external desktop graphics card. While we’ve seen graphics amplifiers before for notebooks (the Alienware Graphics Amplifier for instance), they are certainly unique for an AIO PC.

One thing you’ll notice is that MSI’s latest implementation is a lot more compact than traditional notebook graphics amplifiers. The Alienware one was a huge unseemly block, and even MSI’s own external dock for its GS30 Shadow gaming notebook was fairly clunky.

This time however, the Gaming 27XT’s external graphics card fits neatly onto the rear. The dimensions match that of the system too, so it won’t poke over the top of your display in an unsightly manner. MSI said that the enclosure will take cards like the NVIDIA GeForce GTX Titan and 980 Ti and can provide up to 330 watts of power, so it seems most high-end graphics cards will be compatible. One benefit of this approach is that it actually solves the perennial problem of cooling when it comes to AIO gaming systems. The display itself starts at 1,920 x 1,080 pixels and can be upgraded to a 3,840 x 2,160 pixels resolution. However, the refresh rate varies depending on your chosen resolution – you’ll get a 144Hz refresh rate for the FHD and QHD resolutions, but this will drop to 60Hz if you decide to go the 4K route.

In addition, the Gaming 27XT features two M.2 interfaces, something MSI claims is another industry first. This gives you the option to equip the AIO with two M.2 PCIe SSDs in RAID 0.