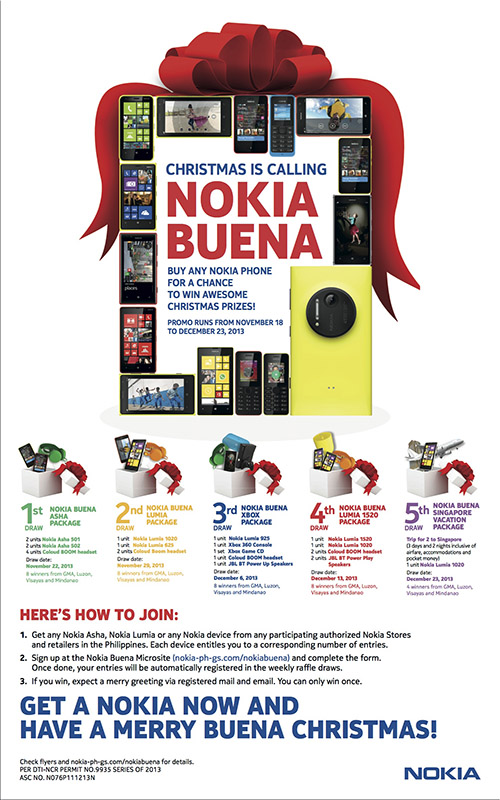 Christmas is without a doubt one of every Pinoy’s favorite holidays. It is also one of the longest-celebrated holidays, with people starting to get into the yuletide spirit as soon as the “ber” months start. It is the season when friends and families really make time for each other through joyful celebrations and heartfelt gifts.

With the “Nokia Buena” Christmas promo, Nokia joins in spreading the holiday spirit and celebrating the time of sharing as they give customers the chance to win awesome Nokia Buena Packages. By simply buying a Nokia Asha, Nokia Lumia, or any Nokia device from participating Nokia Stores and retailers, customers are entitled to a corresponding number of raffle entries – one of which could be their lucky ticket to exciting Nokia gadgets in the weekly draws, or even an all-expense paid trip for two to Singapore in the grand draw. With eight weekly winners and four pairs of grand prize winners, Nokia is giving everyone more chances of having a merrier Christmas.

To join the promo, customers who purchased Nokia devices need to sign up on the Nokia Buena Microsite and complete the form to automatically register in the weekly raffle draws. Each of the five weekly draws will present a different Nokia Buena Package.

With the Nokia Buena Phablet Package to be given away on the fourth weekly draw, eight winners will be one of the first ones in the country to receive Nokia’s first phablet, the Nokia Lumia 1520, with a 6” display and 20-megapixel PureView camera technology. Along with the phablet, winners will also receive one (1) Nokia Lumia 1020 unit, two (2) Coloud BOOM headsets, and two (2) JBL Power Play Speakers units.

For the fifth and final Nokia Buena weekly draw, a total of four winners will score the grand prize – the Nokia Buena Trip Package. Each winner will receive a trip to Singapore for two (2), inclusive of airfare, accommodations, and pocket money. That’s not all – each winner will also receive one (1) Nokia Lumia 1020 unit, perfect for capturing beautiful moments in the most stunning photos and videos.

Christmas is calling, and with the Nokia Buena promo, the spirit of giving is very much alive in the Philippines. Get a Nokia now and have a Merry Buena Christmas!