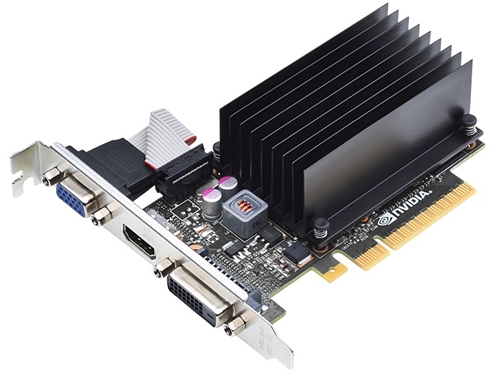 The NVIDIA GeForce GT 720 graphics card has the GK208 GPU at its heart, and the chip features 28nm-based Kepler architecture. It has 192 CUDA cores, paired with 1GB of DDR3 video memory over a 64-bit interface. Another variant has 2GB of GDDR5 video memory. The GPU operates at the default base clock speed of 797MHz; while the DDR3 memory modules are rated at 900MHz, and the GDDR5 ones are rated at 1250MHz. The TDP of the board is a low 25W. Do take note the GeForce GT 720 card supports PCIe 2.0 bus architecture. 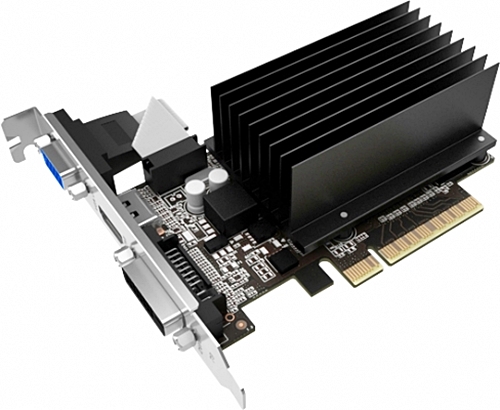 Palit has released two NVIDIA GeForce GT 720 cards and both feature 1GB of DDR3 graphics memory. The first card is a two-slot component (P/N: NEAT7200HD06-2080H) with a passive cooling system. The other card (P/N: NEAT7200HD06-2080F) has an active cooling system and only occupies one slot when installed. The cards’ memory modules have been downclocked to 800MHz, and both of their rated TDP are the same, a low of 19W. Like Palit, EVGA has also released two GeForce GT 720 graphics cards. Both of them are dual-slot components, with passive cooling systems. The only difference is the size of their DDR3 video memory. One of them features 1GB of video memory; while the other has doubled the size. However, unlike their Palit counterparts, the memory modules are rated to operate at the default speed of 900MHz; while their GPUs also operate at stock clock speed of 797MHz. For more information on their specifications, please visit their respective product pages.