NVIDIA has announced the launch of GameWorks VR, the virtual reality equivalent of its multi-platform GameWorks program that provided developers with the tools to create better gaming experiences.

Hardware and software vendors in the VR space will gain access to a complete set of APIs and libraries that will enable them to create even more seamless VR experiences on NVIDIA graphics cards.

GameWorks VR will allow developers and manufacturers to take advantage of features like multi-res shading for more efficient rendering of scenes, VR SLI which allows each GPU to focus on rendering one display, and context priority, to enable headset manufacturers like Oculus to implement asynchronous timewarp on current-generation hardware. 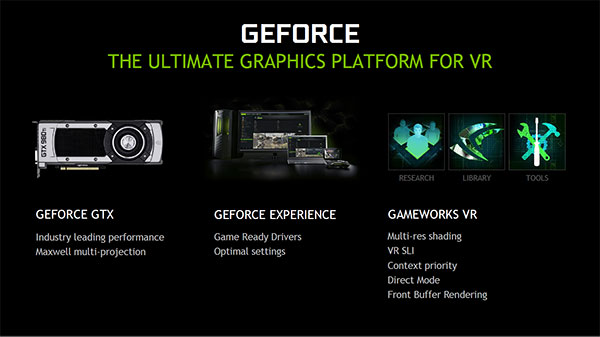 Even the slightest stutter or drop in frame rates can have a huge negative impact on the whole VR experience. GameWorks VR is thus NVIDIA’s solution to ensure that both hardware and software has been optimized for the best experience.

GeForce graphics cards have already been used to power many VR demos. At the Game Developers Conference 2015, developers and manufacturers like Oculus, Unity, Epic Games, Valve and Crytek relied on NVIDIA GPUs to showcase their work.

NVIDIA has also made VR performance a key aspect of the launch of the new NVIDIA GeForce GTX 980 Ti. VR is coming soon, and when it does, NVIDIA wants to be right at the forefront of it all.

Previous Story
It's official, G-Sync is coming to notebooks
Next Story
NVIDIA unveils GeForce GTX 980 Ti at US$649