NVIDIA Promotes the Power of the Tegra K1

NVIDIA Promotes the Power of the Tegra K1 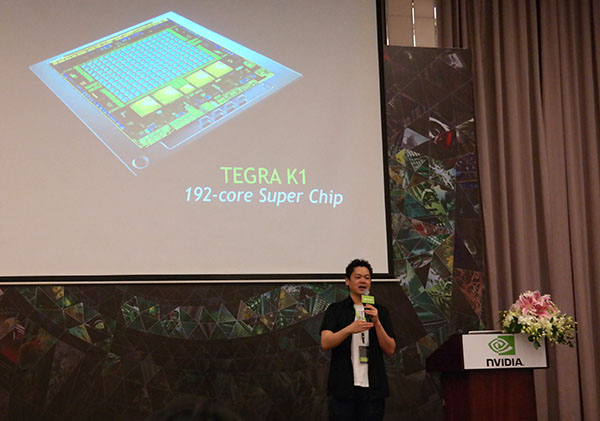 HardwareZone Philippines attended a presentation hosted by NVIDIA in Vietnam last week, which talked about the amazing strengths and capabilities of the Tegra K1. We learned that it's more than just a mobile device chipset.

As reported back in early January, the Tegra K1 has NVIDIA's 192-core GPU superchip which succeeds that of the Tegra 4. Despite being a SoC used in mobile devices, the Tegra K1 actually matches the desktop Kepler GPU architecture. Because of this advancement, it's one of the few mobile processors to support OpenGL ES 3.0, OpenGL 4.4, DirectX 11, and CUDA 6.0. Even 4K output is a cinch for this chip. It's no surprise then that the Tegra K1 can handle heavy-duty software like Unreal Engine 4

Another important matter brought up during the presentation is the availability of two versions of the Tegra K1: One's 32-bit and the other's 64-bit. The 32-bit variant has four A15 CPUs that can run up to 2.3GHz, while the 64-bit type is based on a powerful dual-core Denver CPU setup that reaches speeds of up to 2.5GHz. Both versions are expected to be released in 2014 with partner devices.

A discussion about Tegra K1 VCM ended the presentation to the media. VCM stands for "Visual Computing Modules," and it's how the Tegra K1 will integrate itself into vehicles. With this technology, the Tegra K1 can assist drivers in all sorts of tasks, such as automated driving, a full dashboard interface (capable of running various operating systems such as QNX, Android, Linux, or Windows), as well as easy system upgrades as new hardware becomes available. The NVIDIA processor is camera-based, utilizes ADAS (Advanced Driver Assistance System), and can also monitor driver alertness for safer driving.