Panasonic has just announced the Lumix DMC-GH4 mirrorless system camera, which comes with new autofocus (AF) technology and the ability to shoot 4K video. The GH4 is the successor to the GH3 which was announced in late 2012.

The GH4 also goes fast, with the ability to burst still frames up to 12 per second in single AF and 7 frames per second in continuous AF. The buffer is impressive, the GH4 can record up to 40 raw or 100 JPEG images at a time. Shutter speed has been increased to 1/8000 sec. for stills, the shutter unit is rated for up to 200,000 shots (by Panasonic) and the flash sync speed is 1/250 sec.

Reading between the lines, it seems that the GH4 might come with a weak optical low-pass filter for finer capture detail; according to the press release “optimizing the combination design of new sensor, new imaging engine and low-pass filter enhances the limited resolution by more than 5% while suppressing moire.”

The sensor resolution stays at 16MP, but there’s a new quad-core CPU for its main feature, which is 4K video. The GH4 can shoot 4K video (Cinema 4K: 4096 x 2160 at 24fps, QFHD 4K: 3840 x 2160 at 30fps) in MOV/MP4. According to Panasonic, the GH4 can record unlimited 4K video, but “motion image can be recorded up to 29 min 59 sec depending on the recording format and the camera’s sales area”, likely to avoid having the GH4 being classified as a video camera and getting taxed more.

The GH4 is no slouch at shooting regular Full-HD video either, with the ability to capture Full-HD at 200 Mbps (All-Intra) or 100 Mbps (IPB). The GH4 can output a real-time video feed to an external monitor via HDMI while recording. Panasonic claims that a 50% higher speed signal readout suppresses the rolling shutter effect, a bugbear of CMOS sensors.

System frequency can be selected between 59.94 Hz(23.98 Hz), 50 Hz and 24 Hz. Variable frame-rates, such as 96 fps or 4x, enable slow/fast recording in Full-HD. Zebra patterns can be turned off to check for highlight blow-outs. For anyone wishing for a hybrid AF system from Panasonic like what Olympus has done with the OM-D E-M1, you’ll have to wish a little longer. The new AF system still relies on contrast AF technology, but Panasonic has added what they’re calling ‘Depth from De-focus’ (DFD) technology for even faster AF speeds. They’ve also added Face/Eye Detection AF and 49-point AF with Custom Multi AF modes, plus focus peaking with the ability to switch colors.

The GH4’s electronic viewfinder (or what Panasonic calls the LVF; Live View Finder) however, matches the E-M1’s. It’s an OLED display with a 2,359K-dot resolution, and the rear monitor is also an OLED screen with a 1,036K-dot resolution. The GH4 is built to be tough; the internal body is made out of magnesium alloy and the camera is splash and dust-proof. Wireless connectivity is possible with built-in Wi-Fi and NFC, and the GH4 comes with a variety of ports, including a 3.5mm microphone and headphone jack. The GH4 can use UHS Speed Class 3 SD cards, which guarantee a constant minimum write speed of 30MB/s.

Panasonic’s GH-series has always worn the crown as the video workhorse among mirrorless cameras, and the GH4 continues that heritage. While Olympus has gone all-in for stills photography with the OM-D E-M1, Panasonic has taken mirrorless video to the next level with the GH4. 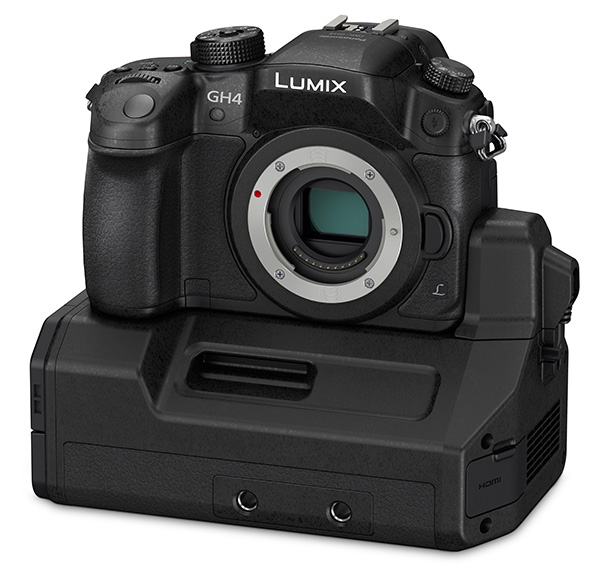