People only have themselves to blame for data loss, Kaspersky Lab study shows

People only have themselves to blame for data loss, Kaspersky Lab study shows

Even though we're always reminded to take apt security measures with regard to the data we store in our devices, most people still expose themselves to risks of data loss . A new study released by Kaspersky Lab tackled how most people fail to protect their data properly despite being aware of threats from cybercriminals. 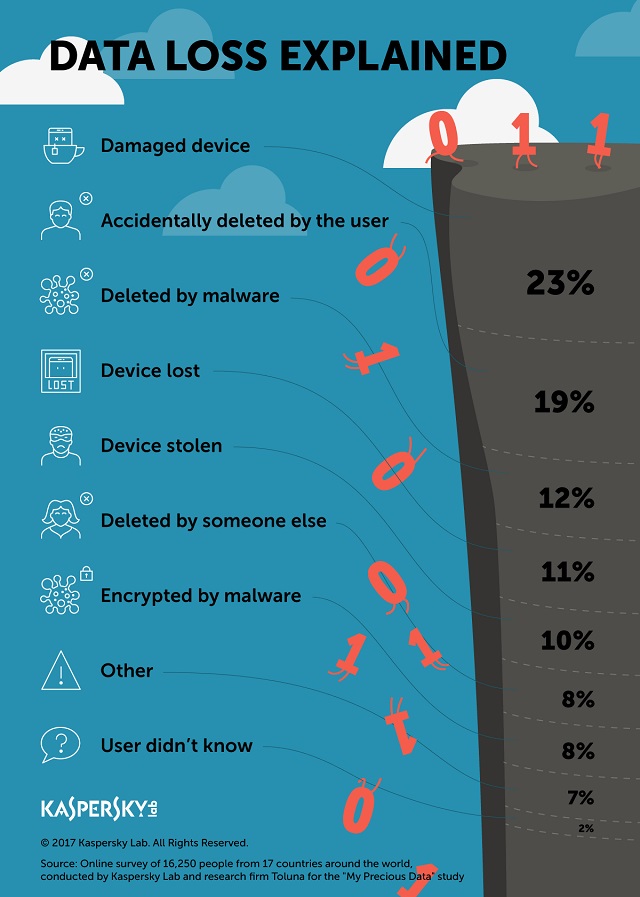 The study found that an overwhelming majority of people recognize there are security threats to their information, with three quarters (73%) agreeing that cybercriminals and hackers pose a high risk to their data, and two-thirds saying malware (65%) is a high-risk threat.

Despite the numbers, only around half protect their devices with a password. In fact, among the respondents, only 53% use passwords for their smartphones, forty-two percent for tablets, and forty-eight percent for computers. The study also detailed that one-in-ten people don't do anything to protect data on their devices at all.

When asked about possible reasons of losing their personal data, forty-seven percent of the respondents admit that their own inattentiveness can put their data safety at risk. One-in-five or 19% lost data in the past because of accidentally deleting it by themselves, and twnety-three percent blamed data loss to their damaged devices.

When it comes to the data people love, photos and videos are seen by many as the most valuable and irreplaceable forms of data stored on digital devices. But these are most likely to be lost from smartphones, with 44% of people saying this has happened to them in the past. Thirty-seven percent of computer users and 30% of tablet users have experienced the same.

“Precious data that we save on the digital devices we use every day is not getting the protection it deserves. With so much trust placed in devices to safeguard our memories and information, it is important that the security measures that individuals rely on are able to adapt to the scenario and keep them safe – no matter what the device or where they use it. Reliance on multiple devices to store what matters most, calls for a more robust and reliable approach. Only then can all points of vulnerability be covered and any gaps in user knowledge or unintentional data mishaps be taken care of,” commented Andrei Mochola, Head of Consumer Business at Kaspersky Lab.

Kaspersky Lab offers solutions like the Kaspersky Total Security which can aid users in performing ways to ensure data protection by allowing them to take safety measures through backing up data to the cloud, encrypting sensitive information, installing password protecting apps, and activating VPN connections in public Wi-Fi networks.