External graphics docks are among the many products that captured our attention this year at Computex and, logically, most of these came from graphics card vendors like ASUS and Zotac. Long-time AMD add-in board (AIB) partner PowerColor also joined the parade by demonstrating the Devil Box which was first announced during Q4 of 2016.

Described as a Thunderbolt 3 eGFX enclosure, the Devil Box takes advantage of the interface's 40Gbps speed to connect to compatible devices. By doing so, gaming laptops and mini PCs can extend their graphics capabilities using the graphics card docked on the Devil Box. PowerColor specifically mentioned on its website that it is compatible with the brand's graphics cards starting from the Radeon R9 300 series up to the RX 400 series and NVIDIA GeForce Founders Edition or reference graphics cards beginning with the GTX 700 series up to the GTX Titan X.

Besides ThunderBolt 3, four USB 3.0, USB 3.1, Gigabit Ethernet, and an internal SATA 6Gbps are also present on the Devil Box, suggesting that it can also serve as a USB hub and an external HDD/SSD enclosure. It also comes with a 500W power supply and is compatible with Microsoft Windows 10 64-bit OS. The Devil Box can be purchased online in select countries, namely China, Germany, Japan, Singapore, United Kingdom, and the United States, for the price of USD 379 (approximately PhP 19,000).

Of course, PowerColor's presence at Computex would not be complete without featuring its prime commodities, its latest graphics cards carrying AMD's Radeon RX 500 series GPUs. 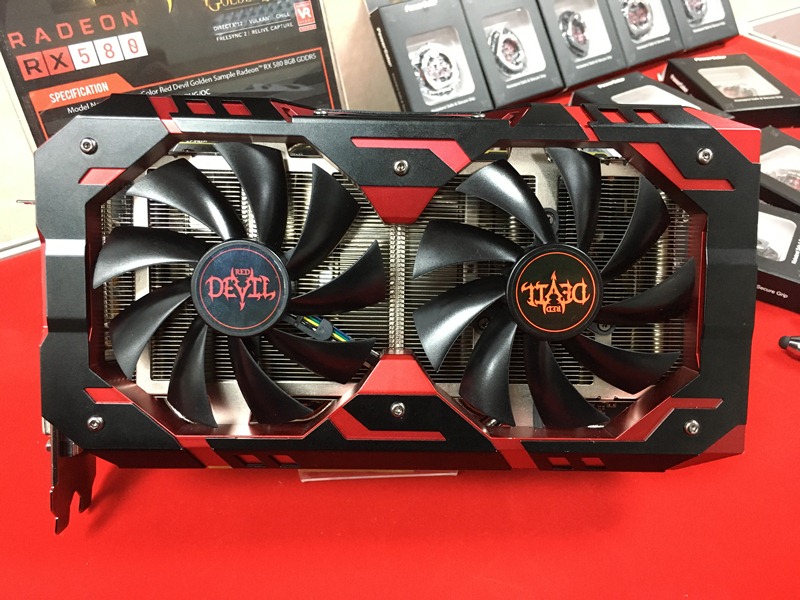 Apart from the Red Devil series, PowerColor also has the Red Dragon series which basically consists of Radeon graphics cards clocked at lower speeds. The Red Dragon Radeon RX 580 comes into two flavors: a 4GB variant that has 7000MHz memory clock and an 8GB version with up to 8000MHz memory clock. Both iterations offer 1350MHz GPU clock speed.