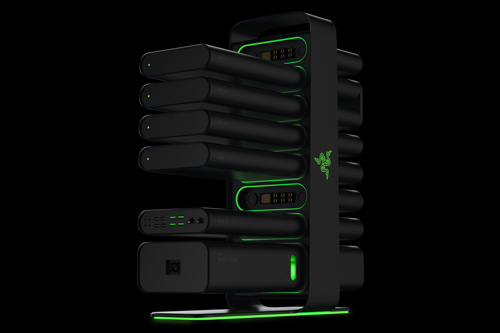 Razer has made a habit of making a splash at CES. About two years ago, they introduced Project Fiona, which eventually went on to become the finished article in the shape of the excellent Razer Edge gaming tablet. Seeing that Razer has a track record of promising and delivering on their concept products makes us doubly excited for Razer's CES 2014 unveiling, Project Christine.

Project Christine is a concept PC that is intended to be extremely modular. Apparently the staff at Razer have been working on the designs for two years and are finally ready to show it off. The product consists of a central spine into which the different PC components can be slotted in. Components can also be removed and replaced with ease.

Modules such as GPU, CPU, memory, and more can all be plugged in to the rack in any combination and are intended to automatically sync. The modules are also intended to have built-in liquid cooling and will not require any cables. Whether the modules will be built exclusively by Razer or wil third parties will be allowed to manufacture components has not been revealed.

There is no doubt that the modular design shown off in Razer's promotional video for Project Christine makes PC assembly and updating look like a piece of cake. Now, we only have to wait and see if Razer can execute their concept, which is contingent on the level of interest shown by the markets.