Although BlackBerry 10 devices will not be available until the end of the year, Research In Motion (RIM) gave a sneak peak of the new operating system and its features at BlackBerry World 2012. Besides the intriguing BlackBerry 10 Dev Alpha, the main highlight of the keynote address seems to revolve around the BlackBerry 10's new keyboard.

According to Tech Crunch, the touch screen keyboard on the BlackBerry 10 Dev Alpha is actually quite impressive. They found the keyboard to be large and comfortably spaced, with small gaps in between each row of keys to minimize typing errors. Even though the Dev Alpha device does not represent the final BlackBerry 10 hardware or software in any way, typing on the keyboard felt smooth and fluid.

Operating on an almost similar concept as the BlackBerry PlayBook, a user relies on swipe gestures to enter text on the Dev Alpha device. For example, a swipe to the left across the keyboard will erase your last input while swiping up will change to the numeric and symbol keyboard. One unique feature of the BlackBerry 10's keyboard is its ability to predict the words you are trying to type in a message. Although predictive text input is common among touch screen devices today, RIM's implementation is a little different and seems more user intuitive.

The BlackBerry 10's keyboard can perform a scan of  your personal history, email, text messages and conversations on social networks to understand your typing style. The keyboard will store and recognize certain words that you often use, and throws these words up as you type your messages. A swipe up gesture over the key where the word appears will send it straight into your message.

Another exciting feature of the keyboard is its ability to adapt to your typing style. Vivek Bhardwaj, RIM’s Head of Software Portfolio, shared with Tech Crunch that there is actually a second, invisible keyboard that will alter the boundaries of each key so that you are actually hitting the keys that you intend to. For the purpose of testing BlackBerry 10 apps during the development of the platform, RIM provides every developer who attends the BlackBerry 10 Jam a BlackBerry 10 Dev Alpha device, with special emphasis that it is not a BlackBerry 10 device for the end user as it does not run on the final version of the software.

It also houses the standard suite of connectivity features such as the microUSB port for debugging and charging, microHDMI port for displaying videos on TVs or monitors, Bluetooth and Wi-Fi. Last but not least, the Dev Alpha device houses a microSIM card slot. 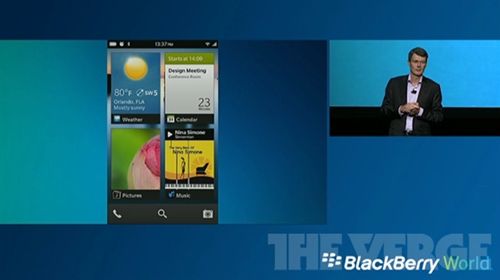 As a company which prides itself on providing excellent communication services, RIM also gave a demonstration of the BlackBerry 10 user interface (UI) which utilizes "glanceable gestures" in the platform to enable seamless switching between apps, documents and notifications. The Verge noted that the UI was generally smooth and snappy.

With the BlackBerry Dev Alpha 10 devices in the hands of developers, RIM released the initial developer toolkit for native and HTML5 software development. The toolkit includes the BlackBerry® 10 Native SDK with Cascades and the BlackBerry 10 WebWorks™ SDK. The toolkit contains a rich set of APIs and IDE improvements that will help developers build high-performance native apps. RIM promised that apps developed using any of the BlackBerry 10 tools will be able to run on BlackBerry 10 smartphones as well as BlackBerry PlayBooks when the new OS becomes available for the tablets.