Rumor: Microsoft and Nokia Might Perform Joint Bid for RIM

Rumor: Microsoft and Nokia Might Perform Joint Bid for RIM 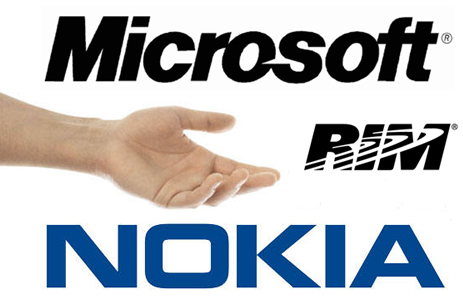 2011 hasn't been a great year for Research in Motion. A massive network outage, loss in nett income and having its PlayBook tablet eating into its profits have given the Canadian company much to worry about as its smartphone market share is eroded by competitors such as Microsoft, Apple and Google.

While RIM is banking on its upcoming mobile operating system, renamed as BlackBerry 10, to give the company a new lease of life, the company keeps an open mind to other alternatives. Its co-CEO, Jim Balsillie, has suggested that no stone would be left unturned to keep the company profitable, which could mean drastic measures to be taken for drastic times.

A recent news by Wall Street Journal suggested that Microsoft and Nokia are considering a joint bid to acquire RIM. According to the report, both companies have "flirted with the idea" in recent months, but the current status is unclear on whether talks will proceed as planned

Should this acquisition turn out to be true, it will re-mold the mobile space, with Apple's iOS and Google's Android dominating the market share while Microsoft's Windows Phone 7 platform will entrench itself as the third major mobile operating system. We won't know for sure what Microsoft and Nokia plan for the BlackBerry platform, though it's not too far-fetched to think that they will tap into RIM's BlackBerry Enterprise Server and BlackBerry Internet Service on top of BlackBerry Messenger. Or, it could be wiped out to pave the way for Microsoft's Windows Live service.

Microsoft and Nokia aren't the only companies considering this option. Reuters also reported on a possible bid by Amazon, with the company hiring an investment bank earlier this year to consider a potential merger with RIM.

Nonetheless, sources close to the matter have informed Reuters that RIM's board prefers to have its co-chief executives Mike Lazaridis and Jim Balsillie focus on improving its business profits through new phones, better use of its current services such as BlackBerry Messaging and restructuring instead of an outright sale or an economic joint venture.

Meanwhile, RIM is still actively wooing developers onto the BlackBerry OS, with its recently concluded BlackBerry DevCon Asia 2011 held in Singapore seeing a strong turnout from its developer base. Developer initiatives such as the BlackBerry Jam Zone, where developers have instant access to information and resources for developing, testing and distributing its apps, will be RIM's focus as it rolls out the BlackBerry 10 OS for its upcoming smartphones and tablets lineup sometime in 2012.

Previous Story
Silicon Power Asks: What Can You Do in Two Seconds?
Next Story
ASRock Fatal1ty X79 Professional Launched!