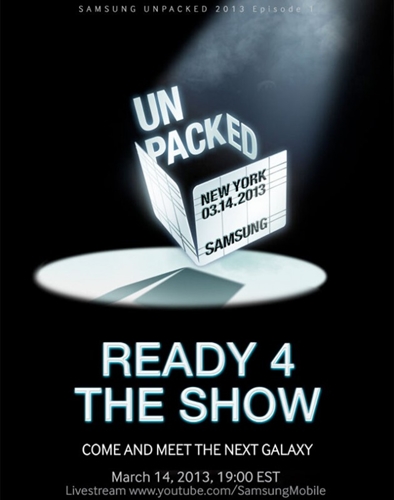 We aren't quite sure whether it's a playful intention on Samsung to jeopardize the attention that MWC is getting, but Samsung has just announced that the Galaxy S IV will be officially unveiled in New York City on the 14th of March. If the intentionally misspelled "Ready 4 the Show" isn't an outright indication, we are not sure what is. There have been numerous rumors surrounding the device, with the smartphone allegedly coming with a 1.8GHz 8-core Exynos 5 Octa processor and a 4.99-inch 1080p full HD display. The Android smartphone is also believed to feature a 13-megapixel rear camera, 2GB of RAM, 4G LTE connectivity, and wireless charging capabilities.

Either way, the event will kick off at 7 p.m. (Eastern time), and you will be able to watch the livestream at youtube.com/SamsungMobile or better yet, stay tuned for our live coverage in New York.